What Is the Land Back Movement? 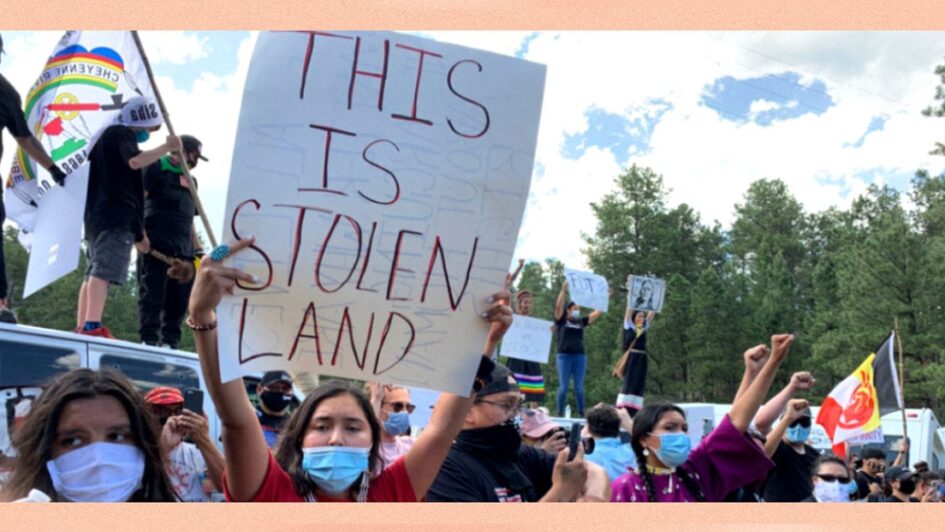 You’ve likely seen the term before, especially if you spend much time on social media, or are interested in saving the environment, climate change, or Indigenous cultures. This term was even featured in the introduction of episode three of the breakthrough Hulu and FX series Reservation Dogs. You may not have fully understood what it meant, but there it was: “Land back.”

It’s a beautifully simple slogan, a literal call for the return of Native lands to Native peoples, and a profound summation of anti-colonial thought. “’Land back’ is a war cry for the liberation of Indigenous people and our land, and it’s a pathway forward,” Nick Tilsen, president and CEO of , tells Teen Vogue.

According to Tilsen, who is Oglala Lakota, the term was born about a decade ago, when a number of Indigenous artists started using it. Further popularized by memes and social media, the mantra has since evolved to encapsulate and inform the political stances of activists who’ve been on the front line for a long time, as well as their allies.

Yet the foundation of the land back movement is much older. For Native people of the Western Hemisphere, it started in 1492 with the arrival of Christopher Columbus on the shores of “the New World,” followed by other European explorers such as Amerigo Vespucci. During this so-called Age of Discovery, colonial conquest was unleashed on the original stewards and inhabitants of what are now known as the Americas. Native populations were robbed of their ancestral lands and wiped out by genocide.

“Our people have been fighting for land back and to reclaim lands since colonization,” says Krystal Two Bulls, director of NDN Collective’s land back campaign. The organization’s calls for the defunding of police, free and prior consent for decisions that impact Native peoples, and the return of public lands. “This work has been happening for generations and generations and it’s something that’s simply being handed down to us.”

The past few years have seen a spate of land reclamations by Native nations. In 2020, Chippewa National Forest was instructed to transfer 11,760 acres of forest service land to the Department of Interior to be held in trust for the , thanks to the Leech Lake Reservation Restoration Act. That same year, the of central California purchased about two square miles of their land back for just under $4.5 million, assisted by Western Rivers Conservancy. In March, with a grant from conservation charities, the raised $355,000 to purchase Pine Island in Maine, their ancestral land. The removal of dams on the Klamath River is also being praised as a land back victory for .

On its face, the land back movement involves the physical reclamation of ancestral lands by the Indigenous people who lived there for time immemorial. But to get to the heart of the matter, we must dive deeper.

Canada must stop the criminalization of land defenders