What is the Role of Socialists in the Labor Movement? 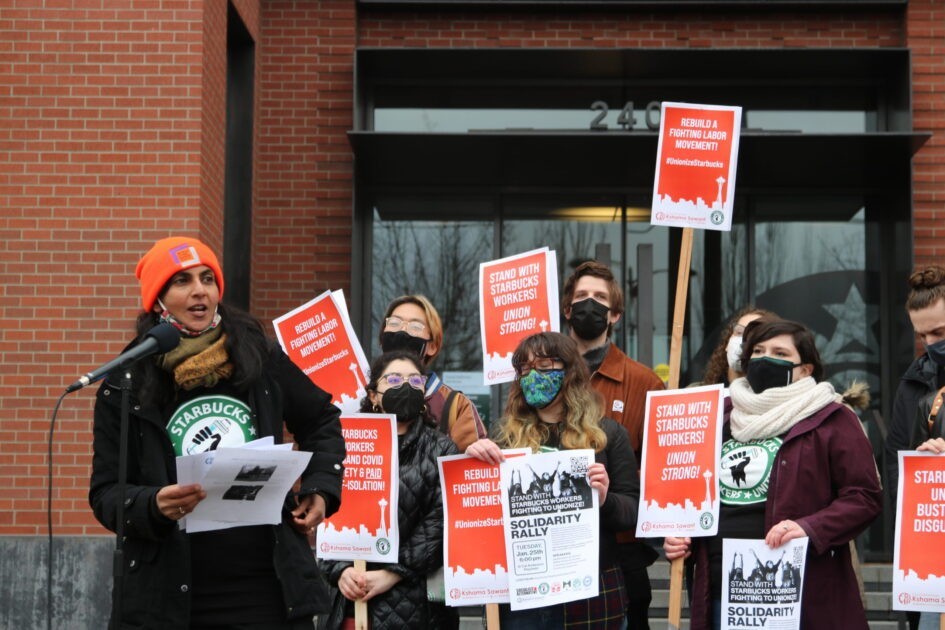 There is a debate developing within Democratic Socialists of America, and on the wider left, about the role socialists should play in emerging workers struggles, such as the historic drive to organize a union at Starbucks.

One side of this debate was expressed recently in a statement appearing in The Dish called “10 Ways DSA Members Can Support Starbucks Worker-Organizers.” I thank the comrades for setting down their proposals in writing, which are, in fact, representative of a broader trend of thought in the DSA sometimes called “light-touch solidarity.”

I won’t mince words. I certainly agree with the authors about the crucial importance of worker leadership. But this document draws the wrong conclusions about the role of socialists at a time when, coming off decades of defeats and retreat, the labor movement urgently needs a new direction. It says in essence that socialists should mainly confine ourselves to posting on social media, writing letters to Starbucks executives, making donations, and not weighing in with our own ideas and proposals on strategy and tactics.

We need solidarity in all these ways. I have myself donated $1,000 and offered $10,000 more from my solidarity fund (created by taking only the average worker’s wage from my six-figure City Council salary) to help Starbucks Workers United (SBWU) and have certainly done my share of social media in support of the struggle. But limiting ourselves to a hands-off approach, while avoiding an open debate about strategies and tactics, would be a serious mistake. On top of material and moral support, which are important, the biggest contributions to the labor movement socialists can make are our ideas and proposals for how to win.

The conditions are favorable to begin rebuilding a fighting labor movement. Low wages alongside historic levels of inflation are helping fuel the highest levels of support for unions in decades. The “labor shortage” gives workers real power in the class struggle at present. A victory at a major corporation right now, such as Starbucks, would be nothing short of an earthquake that could propel workers’ struggles forward nationally and even internationally.

Unfortunately, the labor movement’s decades-long decline means that the starting point and methods of many struggles are rooted in a failed approach called “business unionism.” These ideas, which arose as a direct rejection of class struggle and socialist ideas, flow from the cautious leaderships in most unions that seek to avoid conflict with the bosses. Business unionism sees workers, and companies and their bosses, as having shared interests. But in reality, capitalism is a zero sum game; whatever workers win, bosses lose, and what the bosses win, workers lose. Stemming from this flawed outlook, the themes of business unionism are watering down your message to avoid antagonizing the bosses, not mobilizing workers, not campaigning on concrete fighting demands, and not involving the wider working class in union struggles. They reject the old labor adage of class struggle that “power at the bargaining table comes from outside the bargaining table,” and instead hope to win through moral persuasion of the bosses.

We need to dispel, not further, illusions that the bosses will view workers unionizing as somehow beneficial to them or as “a true partnership with the company.” Our success will depend on a clear understanding of class struggle — that the bosses will fight ferociously to stop the union by any means necessary, and that our only hope is mobilizing working class power.

The refusal to build campaigns around strong demands is also a massive mistake. Workers will be far more unified and committed to fight if they know what they are fighting for. For that same reason, clear demands are crucial to push back against anti-union propaganda. The bosses will say that a union may sound good in the abstract but in practice “they just want your dues money” and “they don’t really do anything.” The best way to defend against union-busting by the bosses is by clearly explaining both why a union is needed and what exactly it will fight for.

As a Marxist elected official and union member, I know only too well the importance of concrete demands if working people hope to win. Building fighting mass movements for the $15 minimum wage and the Amazon Tax were the only reasons we were able to achieve those historic victories.

This debate cannot be avoided and there is a great deal at stake. Given the dominance of business unionist ideas in today’s labor movement, for socialists to play a passive role in worker struggles effectively means abandoning workers precisely to those ineffective, defensive strategies which have resulted in horrifically low unionization rates.

We have seen several recent organizing efforts fail due to an ineffective approach, including at Amazon in Bessemer last year, where the RWDSU leadership had no shop floor strategy, refused to make house visits to talk to workers, and failed to take up offensive fighting demands to defeat the anti-union propaganda of the bosses. We saw how the Amazon bosses didn’t care if they broke the law (and ultimately paid fines), if in doing so, they could break the back of workers’ unionization efforts. Starbucks is doing the exact same thing today.

A Class-Struggle Strategy to Defend the Memphis 7

We urgently need a class-struggle strategy to reverse the firings of the Memphis 7 and other union organizers by Starbucks, including the firing of a leading Buffalo worker.

A legalistic approach oriented to a process with the National Labor Relations Board (NLRB) will simply not be enough. That could take a year or longer — time we don’t have. We need to use the coming weeks to wage a massive public campaign to win the workers’ jobs back, and the coming year to win the union.

What is needed is an escalating series of actions nationally to draw wider attention to the firings, to put the demands of the workers front-and-center, including not only the demand to rehire all the workers but offensive fighting demands as well — such as a national $20 minimum starting wage at Starbucks and a 20 percent raise for all Starbucks workers. Combining the defensive call to rehire the workers with offensive demands can help bring more workers into activity.

Making such national days of action effective will require a serious public campaign, urging labor unions and community organizations to join in. The actions should be scheduled several weeks in advance, and should involve tabling and leafleting outside as many Starbucks stores as possible, a big thing DSA can help with. A main goal of workers should be to turn out as many of their coworkers to these actions as possible. We need to make sure as many workers (and Starbucks customers) as possible know about CEO Kevin Johnson’s shameful attacks, and see themselves as having an active role to play in fighting back.

If these national days of action do not succeed in pressuring Starbucks to reverse the firings, we need to escalate to exercising worker power over production, service, and profits.

One way to do this would be to begin to use the power of strike action with 7-minute walkouts, in reference to the Memphis 7. These can briefly shut down stores at an agreed time nationally, making customers aware of the firings and the reason for the work stoppage with a flier that can be handed out. A similar tactic was used effectively by workers in various industries during the Black Lives Matter protests of 2020, for 8 minutes and 46 seconds, in connection to the amount of time Derek Chauvin was on the neck of George Floyd as he murdered him. In doing such actions there is strength in numbers, and workers may also decide to make tactical decisions to protect themselves such as everyone technically “taking their break” at the same time during the walkout.

We also need to put pressure on progressive elected officials to pass solidarity resolutions, like the one workers and my socialist City Council office recently forced City Council Democrats to vote YES on. Similar resolutions are being brought by my fellow Democratic Socialists of America members Chicago Alderman Byron Sigcho-Lopez, Minneapolis City Councilmember Robin Wonsley, and Philadelphia City Councilmember Kendra Brooks. We should also bring resolutions in labor unions in solidarity with Starbucks organizers and against Starbucks union-busting efforts, which can also make donations to SBWU and commit to upcoming actions.

It is clear Starbucks executives are pairing their vicious strategy of firing workers with their tactic of delaying union votes in the stores to stall the momentum of the union drive. We cannot let these attacks go unanswered, because if the firings are not reversed, Starbucks executives will double down and go after more workers.

Socialists Cannot Sit on the Sidelines

As socialists, it is our role to help chart an alternative path alongside workers who want to build a serious fight back, and not abandon them to the cautious methods of labor leaders who seek to negotiate unity with the bosses and rely on the NLRB.

DSA’s 10 Ways document (linked above) says, “This is a worker-driven movement, let them steer us. If they ask for a sit-in, or a solidarity picket, button-making, etc, be ready to go!” Yes, we need to join every effort to build this fight, but not simply as passive participants. We must bring our analysis of class struggle, because the nature of capitalism and the lessons of past struggles cannot be divorced from the concrete questions facing a movement.

We need open debate, and in this, the measure of a strategy or tactic needs to be on its own merit, not its source. Whether a proposal comes from a Starbucks worker in the store that is organizing, or a worker in a totally different industry basing themselves on their experiences of struggle, or a 15-year-old student writing in their student paper, what matters only is whether that idea is effective. The argument that only proposals from workers in a given corporation or workplace are worthy of consideration is damaging to the class struggle — especially when those ideas really originate in the playbook of business unionism. This view is also, quite frankly, paternalistic towards the workers themselves who are perfectly capable of discussing the merits of an idea, and whose goal is to win a union and concrete workplace victories, not to be lionized from afar.

The real lessons of the labor movement are never going to be taught in the schools or through the mass media, because they don’t benefit the bosses. Under capitalism, working people have been taught to keep their heads down, that they should not be divisive, that they should be good team players (or “partners”) in their workplaces, rather than organizing directly against the bosses for the collective interests of their class. In an all-out fight with the billionaire class such as the one we face at Starbucks, victory or defeat can be determined by whether workers are armed with class struggle strategies and tactics.

It is no accident that the three strikes in 1934 which initiated the rebuilding of a fighting labor movement at that time, and forced FDR to pass key parts of the New Deal, were all led by socialists.

We need an empowered rank-and-file movement from below. The working class is beginning to rise up, and as socialists we cannot confine ourselves to cheering from the sidelines. Real solidarity is what’s needed, and that means fully engaging ourselves, and socialist ideas, in the fight.

‘Now is the moment for the labor movement’: ‘Strikesgiving,’ quits, and America’s great reassessment of work

Yes Virginia, there is a labor movement