What to watch during a pandemic, omicron edition 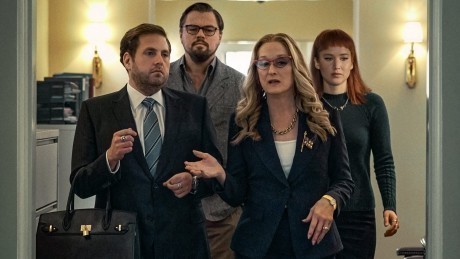 Here in Ontario movie theatres are again being shut down, along with gyms, restaurants, etc. As Ontario and the world suffer through a series of lockdowns or not-lockdowns, as capitalist governments prove yet again that they have no real solutions to the problems of the pandemic or any real appetite for tackling the problems of chronically underfunded hospitals and health-care systems – here are some suggestions for diversions, as we all figure out how to remain politically active in as safe a way as possible. The problems besetting our world in 2022 can’t be ignored and ordinary people can’t abandon the fight for climate justice, for Indigenous sovereignty and land rights, for workers’ rights, in spite of the pandemic we are living through.

Don’t Look Up is a 2021 American satirical science fiction film written, produced, and directed by Adam McKay. The movie is available for streaming on Netflix. It stars Leonardo DiCaprio and Jennifer Lawrence as two astronomers attempting to warn humanity about an approaching comet that will destroy human civilization. The comet is an analogy for climate change and the film is a satire of government and media indifference to the climate crisis.

The film has provoked a lot of debate about its merits (or not) and its politics.  Some critics have lamented what they deem the movie’s too-obvious satire of media and politicians’ responses to/dismissal of the approaching comet, read the reality of catastrophic climate change.

But in the words of an actual climate scientist, Peter Kalmus, author of Being the Change: Live Well and Spark a Climate Revolution:

“But this isn’t a film about how humanity would respond to a planet-killing comet; it’s a film about how humanity is responding to planet-killing climate breakdown. We live in a society in which, despite extraordinarily clear, present, and worsening climate danger, more than half of Republican members of Congress still say climate change is a hoax and many more wish to block action, and in which the official Democratic party platform still enshrines massive subsidies to the fossil fuel industry; in which the current president ran on a promise that “nothing will fundamentally change”, and the speaker of the House dismissed even a modest climate plan as “the green dream or whatever”; in which the largest delegation to Cop26 was the fossil fuel industry, and the White House sold drilling rights to a huge tract of the Gulf of Mexico after the summit; in which world leaders say that climate is an “existential threat to humanity” while simultaneously expanding fossil fuel production; in which major newspapers still run fossil fuel ads, and climate news is routinely overshadowed by sports; in which entrepreneurs push incredibly risky tech solutions and billionaires sell the absurdist fantasy that humanity can just move to Mars.”

Mackay’s movie is clever in terms of the targets he lampoons: Meryl Streep in a Trump-like turn as US President Janie Orlean who tries to force the two scientists who identified the comet and its existential threat to the planet to revise their percentage of certainty from 99% to a more acceptable 70%. Or the character of Peter Isherwell (creepily incarnated by Mark Rylance), the billionaire CEO of tech company BASH, who has great influence over the President, to the point of thwarting an attempt to nuke the comet and thereby destroy its potential planet-killing power. Instead, because he discovers the comet is full of precious minerals that can be turned into trillions of dollars of profit, he wants to try an untested technology that will supposedly break up the comet and thereby reduce its destructive potential, at the same time providing immense profits for Isherwell. And, in any case, if it doesn’t work out, there’s always an escape route for the rich and powerful. They will simply find another planet to inhabit and pillage. (NOTE: Make sure to watch the movie to the very end to see how well that strategy works out.)

Isherwell is obviously a nod to really existing psychopathic capitalists such as Elon Musk or Jeff Bezos, who spend billions of dollars for their personal jaunts to space, rather than using the money to actually help solve real problems here on Earth, such as the lack of Covid vaccinations for countries in the global south, which allows the disease to mutate and continue to wreak havoc.

Targeting of the media in Don’t Look Up is also spot on and brings to mind any number of Fox News hosts who put their focus on bogus ‘news’ stories, like the fake ‘stealing’ of the election from Trump, rather than on the real issues facing ordinary Americans.

Don’t Look Up really does create for the viewer a visceral sense of how much we stand to lose, a bit the same way Stanley Kubrick’s 1964 film, Dr. Strangelove, pointed to the senselessness of potential nuclear war.

However, it’s also true that there is little in Don’t Look Up that points to the potential of actually existing resistance on the ground. At one point Dr. Randall Mindy (Leonardo DiCaprio) and Kate Dibiasky (Jennifer Lawrence), the two scientists who discovered the comet, tell the truth to people in a bar they’re in, after they’ve been effectively silenced by President Orlean and her administration. A riot ensues and Mindy asks Kate dismissively if she thinks people waving placards around is going to help the situation.

But if we look at the real world it’s pretty clear those in power, like the rich and powerful in this film, will never do what it takes to save the planet. Their wealth and power is intricately tied to the fossil fuel industry that is at the heart of the climate crisis. That’s why the people who really mattered at COP26 in Glasgow were not the politicians and fossil fuel capitalists inside the meetings, but the climate justice activists outside.

The title of the film, Don’t Look Up, refers to an exhortation by President Orlean and others around her for people to ignore reality by refusing to look up and see the comet which is speeding towards them. But in another sense Don’t Look Up is a good reminder to those of us who care about our future and the future of the planet not to look up for solutions to the climate crisis. Those solutions will come from below, from the Indigenous activists and others who repeatedly put themselves on the line, to defend the earth and to put the brakes on a system that is only leading to environmental destruction.

The Power of the Dog

The Power of the Dog is another 2021 film available on Netflix, written and directed by Jane Campion, and based on the 1967 novel of the same name by Thomas Savage. Campion is a New Zealand director, the second of only seven women nominated for Best Director for her breathtaking film The Piano (1993).

The Power of the Dog is a kind of Western psychological drama, entirely shot in New Zealand. It’s set in 1925 Montana and tells the story of two wealthy ranch-owning brothers Phil (Benedict Cumberbatch) and George Burbank (Jesse Plemons). They meet widow and inn owner Rose Gordon (played brilliantly by Kirsten Dunst) during a cattle drive. The kind-hearted George is quickly taken with Rose, while the volatile Phil, much influenced by his late mentor “Bronco” Henry, mocks Rose’s son Peter for his lisp and ‘effeminate’ manner.

George and Rose marry and once she and her son move to the brothers’ ranch a kind of psychological warfare begins between both Phil and Rose and between Phil and her son Peter (Australian actor Kodi Smit-McPhee).

Cumberbatch is entirely convincing as the American rancher, a man so repressed that he punishes those around him for his own yearnings and inclination. The film is beautifully shot, and the landscapes are starkly stunning. The Power of the Dog is an exploration of a kind of toxic masculinity mixed with a tenderness that Phil must hide from others in order to survive. It’s also a tale where everything is not what it seems, which is only revealed to us at the end of the movie.

The Lost Daughter, another 2021 film, written and directed by Maggie Gyllenhaal in her directorial debut, based on the novel of the same name by Elena Ferrante is also available on Netflix.

The Lost Daughter features British actress Olivia Colman who is brilliant in this drama about an academic, living and working in the US, who is taking a summer holiday on a Greek island. Her first day there seems idyllic as she lounges in blessed solitude on the beach. However, the next day a loud and overbearing family from Queens arrives and intrudes on her holiday, asking if she minds moving her beach chair so the family can sit together.

We start to get a sense that Leda Caruso (Olivia Colman) is no pushover when she politely refuses to move, saying she’s fine where she is. Leda meets Nina (Dakota Johnson), a young mother, who’s part of the extended family, when Nina’s three-year-old daughter Elena goes momentarily missing on the beach. Leda finds Elena and returns her to Nina, who expresses her growing exhaustion and unhappiness with the experience of motherhood. Elena is upset after she loses her favorite doll, which Leda has secretly taken. In flashbacks, it is revealed that young Leda (actor Jessie Buckley) also struggled with being a young mother to her two daughters, Bianca and Martha, often losing her patience and becoming withdrawn.

This is a movie that deals realistically with the experience of motherhood and the push and pull of a woman who wants to build a career and experience all aspects of life but must deal with raising two daughters with a husband who puts his own needs first. The Lost Daughter is a movie where a lot is hidden and only revealed slowly in flashbacks that take us back to Leda’s life when her daughters were young.

It’s also a movie where a sense of the sinister is lurking in the relationship between Leda and Nina and especially Nina’s other family members, who do their best to make Leda’s stay uncomfortable. Watch this movie for the subtle and complex depiction of the competing desires and ambitions that exist within one woman.

Just a few ideas for some watchable films for the New Year with a reminder that we all have to turn off our screens at some point soon and get back on the streets to make sure 2022 is an improvement on 2021!

Watch “Marx is Back”, Episode 1: Bourgeois and Proletarians

Omicron and the Travel Ban Itch

The Omicron Shame: Why is the World Punishing Instead of Helping Africa?

Omicron: It didn’t have to be Groundhog Day