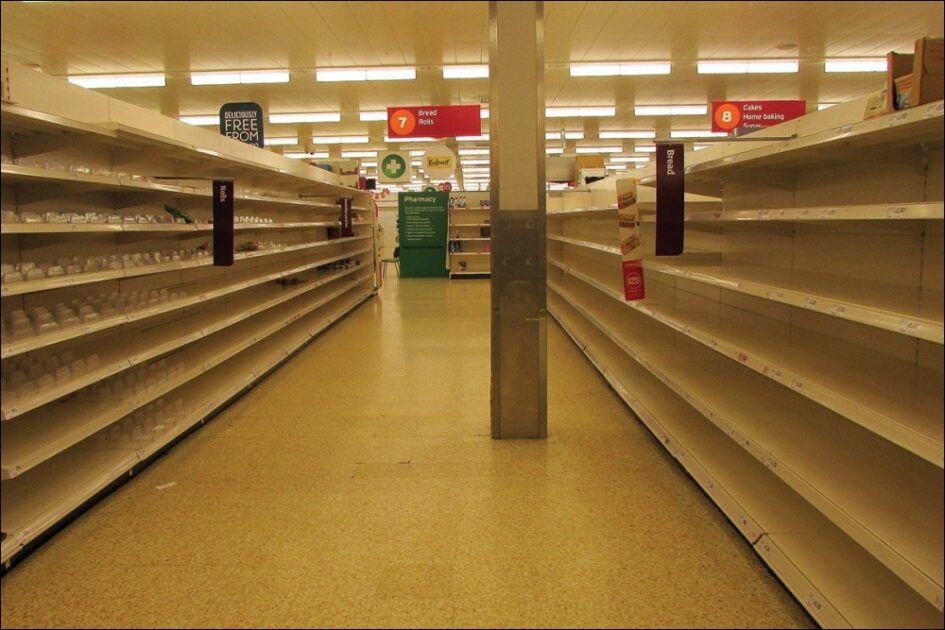 ‘Job openings’ went over 1 million for the first time on record this July and, at the beginning of September, stood at 1.66 million, according to the Recruitment and Employment Confederation (REC). There are over 100,000 vacancies for HGV drivers. But there is also a national shortage of 120,000 care workers, almost 80,000 nurse vacancies, and a lack of over 30,000 primary and nursery education teaching professionals.

The consequences of such shortages have hit the headlines, with reports of McDonalds running short of milkshakes, Wetherspoons running short of beer, and now toast, and farmers giving away crops they can’t manage to get picked. Meanwhile, photographs of bare shelves in supermarkets are becoming common, like at the beginning of the pandemic.

The government may hope the end of its furlough scheme will resolve this crisis, with at least a million people still receiving part of their pre-pandemic wages from the scheme. But many of those workers will have come from sectors hard hit by the pandemic and will not necessarily be able to easily transfer to sectors experiencing shortages, many of which require some level of training. For example, one of the factors in the HGV driver shortages is the backlog of testing, with around 40,000 tests cancelled during the pandemic.

These shortages also reflect longer-term trends. According to the Road Haulage Association, 2,000 HGV drivers are leaving the occupation each week, with only around 1,000 new recruits joining to replace them. This trend meant there were already 60,000 vacancies in the sector before the pandemic.

Many of the employers are pushing for measures to enable easier recruitment of EU workers to fill the shortages, pointing, for example, to the around 25,000 EU HGV drivers who have left since the pandemic and the end of the Brexit transition period. Among the measures they call for are placing HGV drivers on the skilled worker visa scheme.

A Financial Times editorial commented: “Squeezes are also being reported in France, Germany, Italy, the Netherlands and Scandinavia, and in similar sectors: hospitality, distribution, construction, health and social care.” Figures show many migrants from Eastern Europe, who many companies had been exploiting in low-paid, insecure work, returning in 2020: around 1.3m Romanians returned to Romania and half a million Bulgarians to Bulgaria, according to the Economist.

But such workers are not just a tap that can be turned on and off. Last year, 70% of the 10,000 places under the Seasonal Agricultural Workers Scheme were taken up. This year places were tripled to 30,000, but only 53% of them were taken up. In an interview with the Grocer, Nick Marston, head of British Summer Fruits, commenting on migrant workers being permanent, said: “If you’re here permanently, you’ll want a full-time job, not a seasonal one. We’ll see an increasing need for people to come here on seasonal visas.” Such is the addiction of big farms to casualised labour.

What all these sectors have in common is generally low wages combined with terrible working conditions and long hours. Haulage, for example, has nine-hour days, now extended to 11 hours for two days a week, alongside a lack of facilities for drivers to comfortably wash and sleep.

Food and Drink Federation (FDF) head, Ian Wright, commented: “It’s almost certainly the case that one of the main drivers in the lorry driver shortage that we’re facing is that qualified HGV drivers have gone into being distribution drivers for Tesco and Amazon, because they’re nicer jobs, they don’t require you to get up at 4am and they’re better paid,”

Berry grower Hugh Lowe Farms, for example, boasts on its website that “good harvest workers can earn £400 a week…” but that translates into earning just £10,400 over six months, hardly a fantastic wage.

Does this mean that these shortages will, as a Financial Times editorial put it, “boost workers clout”?

In the short term, in some sectors, it has done so, to an extent. Some employers are increasing wages, especially HGV companies who are in fierce competition with each other. Unite the union, however, is currently in dispute over Booker (a wholesaler owned by Tesco) increasing HGV drivers wages at one depot by £5 an hour, but not at another. Shortages in nursing and education haven’t forced the government beyond a 3% pay rise in the NHS and a pay freeze for teachers.

But more common seem to be the huge sign-on bonuses offered, which hit headlines in August. HGV drivers were offered £1,000 at Asda and Tesco, and £2,000 at Arla dairies. Two jobs for registered night nurses for care homes in Scotland came with a £10,000 ‘welcome bonus’.

Key to ensuring that pay increases are won, and then maintained, is an active strategy from the trade unions. Unite launched a “Unite Drivers’ Manifesto” earlier this year, which includes some welcome demands around facilities for drivers to park, access to toilets, employer funding of legally required training. Protests by Care and Support Workers Organise have called for a £15-an-hour minimum wage, among other demands.

Such initiatives should be expanded upon, with trade unions bringing together conferences of reps and activists in these sectors to discuss the issues they are facing, and to present their demands to the employers and the government, backed up with a strategy of campaigning, up to and including potential industrial action to achieve it.

This should not just be limited to patching up the broken system being currently operated, but include how the real needs of workers and their communities could be met, in terms of decent working conditions and remuneration, and the provision of quality services. This should include not just filling up the official vacancies, but a strategy to fully staff these sectors to put a permanent end to shortages and rationing of goods and services.

Moreover, in the short term, if there are services that can’t be provided or goods that can’t be stocked, decisions about what measures need to be put in place should be democratically decided by workers’ representatives, rather than the bosses. As the FDF head admitted: “Last week, the whole of the east of England was basically unsupplied with bottled water because it was just not possible for the businesses that move that stuff around to supply that and everything else… So businesses took a decision to prioritise products with a higher margin.”

The labour shortages crisis has shown that the limited ‘planning’ big business and the Tories engage in on the basis of the market relies on low pay, long hours and poor conditions, ie exploiting workers to put their ‘margins’ (profits) first.

We, instead, need to take the decisions out of their hands, by bringing the major companies in these sectors into public ownership. If these were run under democratic workers’ control and management, as part of an overall plan of production, the supply of goods and provision of services could be planned to meet the needs of all workers.

Returning to campus: Students need to stand up and fight

The US Isn’t Done With Afghanistan