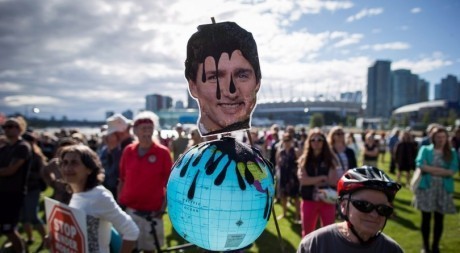 According to Canada’s financial watchdog, the federal government is “very unlikely” to recoup its $4.5-billion investment after the crown Trans Mountain Corporation (TMC) announced on February 18th that the project’s costs have exploded from $7.4 billion to $21.4 billion, an increase of 189% over the original budget for the project.

The government has already announced that they will stop funding the pipeline and said that the crown corporation would have to secure third party financing going forward. If TMC retains ownership as a crown corporation, however, taxpayers would still be on the hook for any debts incurred. In all likelihood, the government will now be looking to eventually sell the pipeline to the private sector: “It will probably mean losses for Canadian taxpayers whenever the government decides to sell the pipeline to a private-sector entity” according to Yves Giroux of the Parliamentary Budget Office, responding to a request for information from the NDP Environment and Climate Change critic Laurel Collins.

Despite this, deputy PM Christia Freeland has declared the project is “in the national interest and will make Canada and the Canadian economy more sovereign and more resilient.”. BMO Capital Markets and TD Securities advised the federal government that the project was commercially viable and that public financing is an option. Suncor CEO Mark Little responded that while they were disappointed, “we remain fully supportive of this world-class infrastructure project which is vital to Canada’s long-term economic success and energy security.” Their disappointment is with potentially higher borrowing costs, but the Canadian government and oil company executives agree that TMX is of strategic importance for Canada’s future, and further public funding is still on the table.

Trudeau poses as a champion for climate action, battling with Tory premiers over the carbon tax, yet he has continued the fossil fuel “energy superpower” policies of Harper, strengthening the ties of the Canadian state to fossil fuel industry interests. Not only is there not a Just Transition plan, it is hard to find evidence of a transition from the fossil fuel economy at all.

Trudeau also follows in Harper’s footsteps on NATO’s eastward expansion that has exacerbated the conflict with Russia. While posing as a defender of democracy against Russia’s brutal invasion of Ukraine, his government continues supplying military hardware and lethal weapons to Ukraine and training fascist elements in the armed forces, making war more likely. Part of the motivation for Canadian involvement comes from the prospect of the revival of East Coast LNG to replace Russia’s LNG supplies to Europe, and rising oil prices as a result of the conflict have suddenly improved the profitability of tar sands extraction projects, and the construction of pipelines like TMX and CGL.

Mobilizing those concerned about climate justice to oppose the Russian invasion of Ukraine, support refugees fleeing the conflict and taking on Canada and NATOs role in bringing the world to the brink of a worldwide conflict, is important for exposing the hypocrisy of Trudeau’s policies.

The Liberals had shamelessly justified the TMX carbon bomb as a central part of their climate plan with TMX revenues supposedly funding the transition to the green economy. But the ballooning costs mean that far from being a source of revenue, more and more public money will be needed to complete it.

Canadian capitalism is addicted to the profits from the extraction, production, transportation and consumption of fossil fuels and almost all other sectors of the economy rely on energy from these sources. While Trudeau is more willing to acknowledge the climate crisis and to talk about solutions, in contrast to Harper, the actions of his government since 2015 is denial in action characterized by shameless hypocrisy: Canada is the only G7 nation to see their emissions rise since 2015, despite Trudeau posing as a climate champion; on June 17th 2019, Parliament declared a climate emergency, then the very next day Trudeau approved the TMX project.

This mirrors the hypocrisy on other issues, such as Indigenous rights and sovereignty. Despite the flowing rhetoric about seeking reconciliation with Indigenous peoples, government policies instead run roughshod over Indigenous sovereignty in contravention of even Canadian law.

The TMX pipeline is being constructed over unceded Secwepemc territory in so-called BC, without the “free, prior and informed consent” of the Traditional governance of the Secwepemc people, and against the resistance of the Tiny House Warriors, a group of Secwepemc land defenders.

Three invasions in 3 years by RCMP into Wet’suwet’en territory to clear land defenders from the path of CGL pipeline construction further show the priorities of provincial and federal governments are for these hydrocarbon projects, supported by courts, police and right wing vigilantes. Shamefully, the NDP government in so-called BC is responsible for  ramming these projects over unceded Indigenous territories.

This Liberal climate plan was always a sham – the money spent on it so far could instead have been invested directly in the green economy, accelerating the transition earlier. If TMX pipeline construction is completed, it’s operation will enable the release of catastrophic volumes of carbon before any real action is taken. Large chunks of money in the Liberal plan are allocated to false solutions like carbon capture and storage (CC&S), as an alternative to actually reducing fossil fuel production and use. These projects are floated, not because they have any chance of success, but in order to allow industry to continue producing and consuming fossil fuels.

It’s important to come back to the alignment of views on the TMX pipeline shared by the Deputy Prime Minister and the Suncor CEO, that it is in the “national interest” to keep fossil fuel profits flowing. The lack of action on climate shows that it is apparently not in the “national interest” to support Indigenous peoples already bearing the brunt of climate change on the traditional territories that they sustained for millennia or the casualties of more and more frequent “1000 year storms”, “heat domes” and “atmospheric rivers”, or the future generations who will face a bleak existence if urgent and rapid action is not taken to drastically reduce emissions immediately.

Working people do not benefit from this situation. Continuing massive subsidies for the oil and gas industries do not translate into large numbers of permanent jobs. This is an industry that requires a lot of investment in building and maintaining infrastructure that is increasingly automatic, requiring relatively few operators. There are many more jobs in the green economy in building retrofitting, decarbonizing transportation and energy production and other areas. The green jobs in education, healthcare and other services can be expanded as well.

This is where the apparent absence of a plan, given the disappearance of the expected revenues from TMX comes in. This is compounded by the fact that the Liberals have also dragged their heels on passing the Just Transition Act, that would create programs to help with this transition. The absence of a real plan, and the delays implementing the Just Transition Act, are not accidental. They reflect the interests of the Canadian state to continue to rely on fossil fuel profits going forward despite all rhetoric to the contrary. On the just transition question, there is a bit of a catch 22 situation: If the government doesn’t implement an adequate Just Transition plan, then it will be harder for workers in carbon intensive industries to believe that they have any protection, creating barriers for them to support a Just Transition.

This is why building a massive movement from below, bringing together masses of people from Indigenous communities, racialized and other marginalized communities, labour unions and environmental movements to articulate these demands is so important. Unless there is a powerful enough force from below to bring these measures forward, there is no mainstream political force that will truly champion these demands. It’s been 3 decades of international meetings to solve the climate crisis and emissions have not stopped rising. The latest IPCC report sounded the alarm even more than previous reports, reporting that the “extent and magnitude” of the environmental crisis is far greater than previously estimated. “Widespread deterioration of ecosystems” with irreversible damage to biodiversity and fundamental changes to ecological systems has already taken place. We cannot afford to build and develop the climate justice movement only to have leaders ignore our pleas for action: we need to develop the power of our movement through the coordination of our collective and combined actions from below, on the streets, on the picket lines and at the blockades.

Justin Blake, uncle of Jacob Blake, said at a protest after…

Unmasking the Divisiveness of Justin Trudeau

The climate plan we got, and the one we need