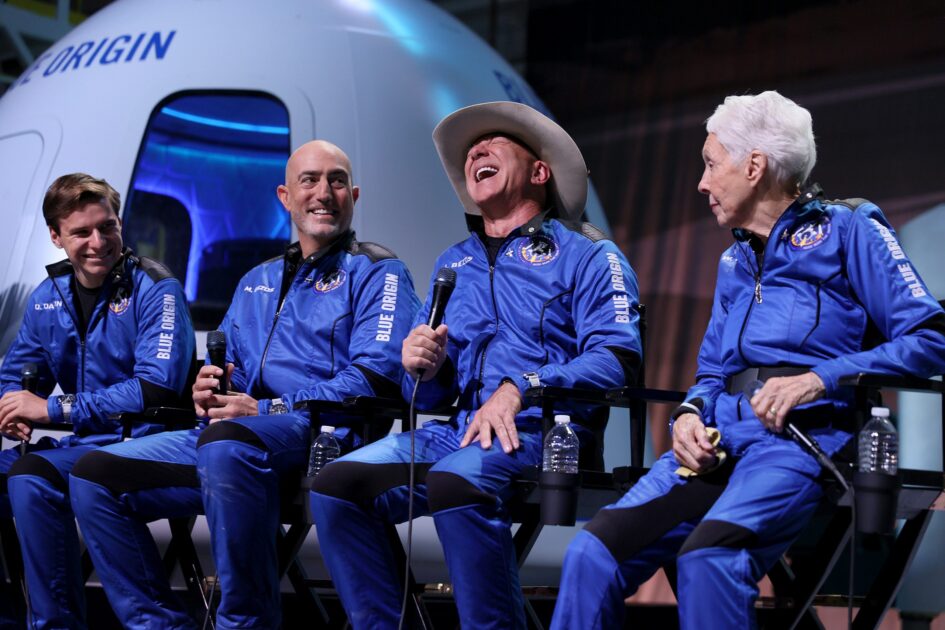 Last month, the eyes of the public were focused on Jeff Bezos’s little rocket as it climbed its way up to the part of the sky where space begins. Almost every media outlet, especially those in the Western world, covered this event extensively. But while citizens of the Global North were glued to their screens, eager not to miss any single detail of this historic moment, willing themselves to feel the same awe with which humanity watched one of its own set foot on the moon, people in the other part of the world, the underworld, were following another major event: the virus.

In a country like Tunisia, like many countries in the Global South, the government’s resources are limited, and preventive measures like social distancing can’t be applied properly. We managed to successfully contain the first pandemic wave with strict lockdown measures, but those took a toll on people. Tunisia is a poor country—we face many economic hardships. So, when the government reversed the lockdown and opened its borders to Western tourists who could bring euros and dollars with them to our country, it opened the door to disaster.

The second pandemic wave has been much more devastating than the first, especially with Tunisia’s fragile healthcare system struggling to keep up, and things have escalated fast with the spread of the Delta variant. Out of its nearly 12 million inhabitants, Tunisia has only fully vaccinated about 1.7 million. Last month, we experienced a deadly COVID surge that gave us the terrifying distinction of having the worst infection rate in Africa at the time, recording an average of 200 deaths per day. These last few weeks, my social media feed has mostly consisted of people announcing the deaths of their loved ones. It has also been filled with people looking for oxygen concentrators—or open spots in the emergency room.

At the same time, even with all this pain and chaos around me, I couldn’t avoid all the Western media outlets publishing articles, posting photos, and broadcasting live videos about a white American billionaire’s trip to space. I saw so many people following the event, posting about it, reacting to it with a hype that mirrored the media’s coverage. I couldn’t help but notice once again, and with that familiar sadness and resignation, the gap that exists between our worlds: In one world, people were counting the miles Jeff Bezos’ spaceship traveled; in the other world, we were counting our dead.

Growing up, I remember hearing adults around me saying things about the West and Westerners. “Our lives just don’t matter to them,” they said. “They wouldn’t care if a whole nation disappears.” At first, I thought that these were merely the words of leftist or anti-imperialist movements. The pandemic, however, has laid bare for me the truth that my parents’ generation knew too well. Even now, as I look up to the sky that a billionaire just grazed, I wonder if anyone in the West would care if our nation disappeared.

I don’t blame those who followed this event with excitement; I just can’t do the same. In many ways, this is more of a problem with the media we consume than with the people who consume it. After all, it’s quite normal if most people in a given population don’t know how bad the pandemic situation is in a foreign country since national media, by definition, speaks to national audiences, and those audiences are innately more concerned about what’s going on in their world. However, from the initial global spread of COVID-19 to the mutated emergence of new, deadlier, more contagious variants that have grown in the human petri dishes of unvaccinated societies, I would hope that this pandemic has demonstrated to people that the boundaries between their world and the rest of the world are not as rigid as they’d like to think.

It’s the media’s job to show that. The media is supposed to inform people about important things happening in the world they’re a part of—and to remind us that we are, in fact, part of that world. And yet, as I scoured many Western publications over these past few weeks, I was unsurprised to find only a small few reporting on donated vaccines arriving too late to Tunisia. (Like so many other non-wealthy nations, due to the economic hardships we face, and due to the protection of pharmaceutical companies’ profits over the lives of human beings, our government has had to wait for salvation in the form of global solidarity aids—a wait that has cost the lives of thousands of Tunisians.) I saw very few outlets covering Tunisian people dying in front of hospitals because of a lack of emergency room spots, forcing doctors to choose which patients to admit and which ones to turn away.

Tunisia is by no means the only example of a country in the Global South still struggling with the pandemic. For many of us, this is the norm. There are many other countries where people are dying every day because they can’t get access to sanitary services and vaccines. Nevertheless, the international media continues to either ignore our suffering or sporadically report on harrowing examples of the problems we’re facing in our countries, as opposed to reporting on those problems as an ongoing, interconnected crisis for the human race. If journalism is about publishing the news that matters, then that can only mean that our pain and our stories aren’t worthwhile.

Maybe the event of a white billionaire man breaching space for a few seconds is more important than covering the people of the Global South still struggling with the virus. Should we just accept, then, that the role of international media is to give even more visibility to those who are already privileged and powerful enough to command our attention, while letting the “wretched of the earth” wallow in crushing silence? Is this all we can hope for? Is this all journalism can be?

Back in 2020, when everyone felt equally threatened by the pandemic, Western publications produced much content about this crisis and its different aspects (mental, social, economic, etc.). Now, countries in the Global North are vaccinating the majority of their citizens and rushing to return to “normal life.” And for someone in my position, it certainly feels like the media’s response is to follow suit, as if the COVID problem being “over” in the North means it’s over everywhere else in the world. But this is what it looks like when the world revolves around the West and everything (and everyone) else is pushed to the margins.

Who and what the media chooses to cover (and how often it chooses to cover them) is only part of the issue; the other part is what that coverage itself looks like. When Western media reported on the $5.5 billion spent by the billionaire man to be in space for four minutes, they largely failed to clearly communicate the true scope, the true cost, of the (lost) societal potential that amount of money represents. The price tag for Bezos’s space ride, for instance, amounts to 28.5% of Tunisia’s state budget this year. Hypothetically, if that money was miraculously added to the government’s budget, Tunisian people could have had better and earlier access to vaccines; we could have had a better healthcare system with more emergency rooms; we could have saved thousands of lives.

The media certainly did emphasize the astronomical exorbitance of Bezos’s little stunt, to be fair, but unless you translate such exorbitant sums into concrete forms that people (most of whom, shockingly, aren’t billionaires) can understand, it’s just a number—a figure as incomprehensible as the size of the universe itself. And that fog of incomprehensibility covers up the true scale and human face of the injustice (which it is the media’s responsibility to uncover). For me, as a person with chronic disease who comes from a country where I can’t be guaranteed a place in an emergency room, let alone an oxygen concentrator, the injustice is not incomprehensible—it’s all around me. That the media largely does not convey these things in this way is, I think, deeply unfair.

Within individual societies and across the globe, the pandemic has revealed more clearly than ever the widening gap between the haves and the have-nots. It has also revealed how that gap puts all of us in danger—COVID-19 will forever be a deadly reminder that humanity cannot prosper as a whole while leaving large swathes of its population in the dust. The media alone cannot change the global class divide, but it can certainly do a better job of reporting on and explaining it as the existential threat to humanity that it is; it can also help to reorient our cultural notions of what “success” looks like. Why do we so narrowly define success by one’s personal achievements and hoarded riches instead of by the ways they have positively impacted the lives of others? Why do we not expect or demand that money be understood as the potential to alleviate suffering and invest in the flourishing of all—and that incredible sums of money spent on things like Jeff Bezos’s puddle jump to inner space are a violent waste of that potential? That may sound to you like a naive question, but come live where I live, come see what I see, and you’ll understand why I’m asking it.