Who Gains from Ethiopia Tigray War? 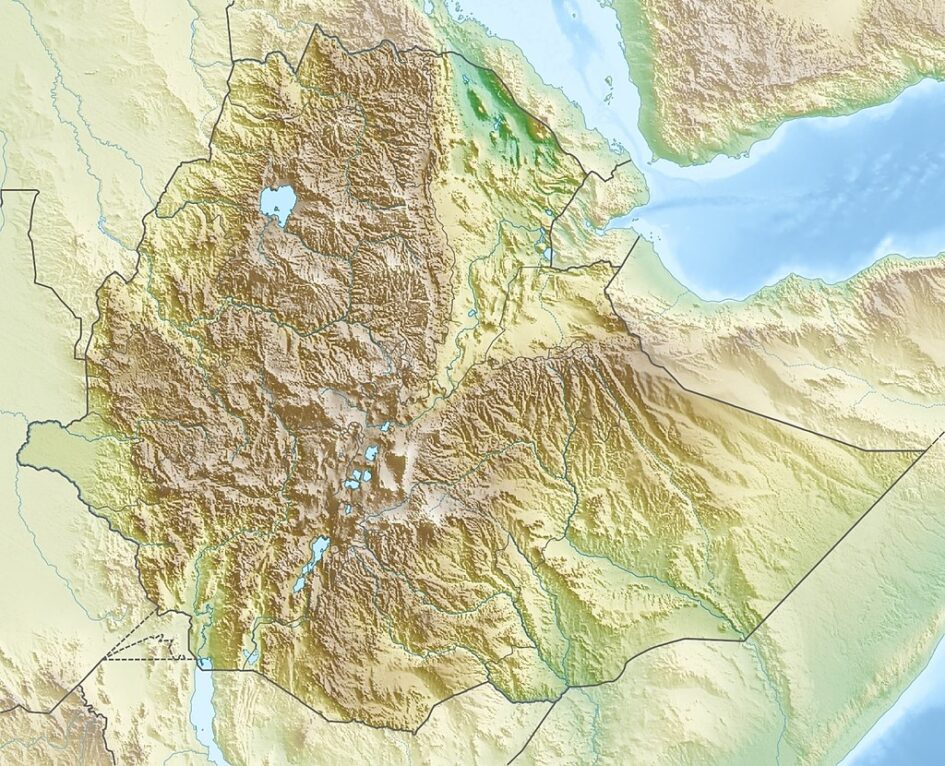 If you want to know who is likely to be at war, just look at who is given the Nobel Peace Prize by the Norwegian (NATO) Parliament. Obama got it just days into office before he escalated the war in Afghanistan. Henry Kissinger got it in the 1970’S. And two years ago the Prime Minister of Ethiopia Abiy Ahmed got the prize for making “peace” with Eritrea. Within a year, the much-praised peace deal between Abiy Ahmed and Eritrea’s dictator, President Isaias Afwerki, the two had united to wage war against the Ethiopian Tigray people in the province bordering Eritrea. The alliance of the two was clearly about eliminating the powerful formerly-ruling Tigray minority. Who now stands to gain in the growing debacle?

Today the reality is that Abiy Ahmed and his demoralized soldiers are in dire straits as the better-trained Tigray guerilla forces of the Tigray People’s Liberation Front (TPLF), approach Addis Ababa. There is good reason to believe that Biden’s Special Envoy to the Horn of Africa, Jeffrey Feltman, is manipulating events behind the scenes and not for peaceful resolution.

Nominally, the war was launched by Abiy because the Tigray state disobeyed the new government’s covid ban on scheduled elections. Clearly the Tigray, who ruled Ethiopia as a minority ethnic group for almost three decades until 2018–when it was forced by popular protests to yield rule to Abiy– were at a severe disadvantage, as Abiy gave a green light to Eritrea’s brutal dictator, Isaias, to invade the Ethiopian Tigray state from the north while Abiy’s military attacked from the south. Isaias’s soldiers carried out murder of thousands of Tigray civilians and carried out war crimes including rape and pillage in what has been called ethnic cleansing. The Eritrean forces, estimated at some 80,000 occupied a third of the region of Tigray. All communications were cut by the invaders.

Isaias and Nobel Peace Prize awardee Abiy Ahmed launched what can only be called a war of annihilation against the Tigray TPLF. They have imposed a siege of food supplies in the region and some 900,000 are reportedly on verge of starvation. Villages, cities and farms have been destroyed as the Eritrean forces reportedly used drones supplied by the UAE to bomb the land. The Tigray leadership and their trained military, the Tigray Peoples’ Liberation Front, TPLF, fled to the hills to wage guerilla warfare, as Abiy openly called the Tigray TPLF, a “cancer” on Ethiopian society, and to the TPLF as “weeds.”

Now one year into the war to destroy the Tigray, the TPLF has managed to dramatically regain much of Tigray state occupied by Eritrean troops as well as unite with the anti-Abiy Oromo Liberation Army (OLA) to move on the capitol, Addis Ababa. Reportedly Abiy’s army has been devastated by military losses and mass desertions.

On June 28, 2021 seven months after the supposedly powerful Ethiopian National Defense Forces rolled through Tigray, the Tigrayan Defense Force (TDF), the rebranded military force of the TPLF, reconquered the Tigrayan provincial capital Mekelle, marching in with thousands of Ethiopian and Eritrean prisoners. By that point according to Alex de Waal, executive director of the World Peace Foundation of Boston, of 20 Ethiopian NDF federal army divisions, “seven have been completely destroyed, three are in a shambles.”

The situation is now so dire that in late November Abiy announced he was going to the front to lead his troops against the TPLF. And in early November he called on civilians to muster for the defense of the capital. That was not a sign of strength, but of desperation as his military is reportedly in total disarray. Abiy is from the ethnic Amhara group. The Amhara are the largest ethnic group with almost 35% of the 118 million population. Oromo have some 27% and Tigrayan, 6%. The military alliance of Tigray TDF forces with Oromo have reversed the odds in the ill-fated war. As of mid-November they were some 270 km from Addis Ababa.

At this point the most likely outcome of Abiy’s two-year Tigray War is the breakup of Ethiopia into ethnic civil war, and the descent of Eritrea into economic and political disarray. As analyst Gary Brecher described the likely outcome, “What if the TDF/OLA forces go all the way to Addis and take control of ‘what is now Ethiopia’? It’s a pretty safe bet that their alliance would dissolve in a matter of months, and the country would descend to a multi-ethnic war between provinces, then between towns…”

Washington and several EU states are playing a covert role in fanning the war, while posing as “neutral.” The Biden Administration, guided on its Horn of Africa policies by Ambassador Jeffrey Feltman, sanctioned Isaias and his Eritrean military for its role in the war on November 12, tilting the odds to advantage potentially of the TPLF.

On November 21, a secret meeting via zoom took place moderated by Ephraim Isaac.

Ephriam Isaac, now at Institute of Semitic Studies, Princeton, is chair of a murky outfit known as The Peace and Development Center based in Washington, which calls itself, “an independent national not-for-profit and non-governmental organization working for conflict prevention, conflict resolution, peace building and development in Ethiopia and the horn of Africa.” Its website lists as sponsors the US National Endowment for Democracy, a self-admitted CIA front which specializes in regime change color revolutions; USAID, which has often been involved in CIA covert operations, and the UN.

Ephriam Isaac was close to the late TPLF Prime Minister Meles Zenawi, and was instrumental in helping to bring the TPLF to power in 1991. Present at the recent zoom meet were also Ambassador Vicki Huddleston, former US Deputy Assistant Secretary of Defense for African Affairs during the Zenawi era, along with Donald Yamamoto, one of the US government’s most senior Africa experts who just retired. And former and present senior diplomats from UK, France, and the EU. They all agreed that as Huddleston said, “Abiy should step down, there should be an all-inclusive transition government.”
The secret video conference suggests that NATO countries, led by the US, are going out of their way to favor the TPLF.

This Tigray war at some point will bring into question the fate of the controversial Blue Nile River dam, the Grand Ethiopian Renaissance Dam, a huge project about 45 km east of the border with Sudan and close to the Tigray province. Despite the repeated efforts of Egypt, and partially Sudan, to diplomatically get Ethiopia to halt the dam, the Abiy Ahmed regime has refused to cooperate in any way. In July, Abiy proceeded with the second phase of a multi-year filling of the dam ignoring the protests of Sudan and Egypt who are both dependent on water from the Blue Nile for their survival.

The GERD, with a capacity of 6.5 gigawatts will be Africa’s largest hydroelectric power plant and the world’s seventh-largest dam. It can hold 74 billion cubic meters of water – more than the volume of the entire Blue Nile, originating in the northern Ethiopia highlands, origin of 85% of the Nile’s water flow. The temptation for Egypt to intervene, even covertly, on the side of the Tigray is huge and may in fact according to some reports, be ongoing. Were that intervention to sabotage the dam, the fuse would be lit for a war spanning from the Horn of Africa to Cairo. Among other things that would clearly impact shipping traffic through the Horn of Africa, the only link to the Indian Ocean via the Mediterranean. It is the entrance to the Red Sea which is the world’s second largest shipping lane.

Erdogan’s Turkey is also involved in the Horn of Africa. On November 21, Somalia’s Army Chief Gen. Odawaa Yusuf Rageh met Turkish Defence Minister Hulusi Akar in Anakara, where they reportedly discussed political and military cooperation. Turkey has also been supplying military drone aircraft to Abiy Ahmed’s army. Somalian President Mohamed Abdullahi Mohamed ‘Farmaajo’, joined the war on Tigray along with Eritrea and Ahmed. Somalia invaded Ethiopia in the 1977 Somali invasion of the Ogaden region of Ethiopia before being defeated by a Soviet-backed Ethiopian army. With Turkish backing, at some point Somalia could decide it opportune to again invade Ethiopia, especially if Tigrayans take Addis Ababa.

With Ethiopia in internal civil war, Sudan’s military could decide it might benefit from a war with Ethiopia as well. Already Ethiopia’s Abiy has accused Sudan of taking advantage of the war by seizing territory in Ethiopia. US Envoy and Color Revolution specialist Jeffrey Feltman was in Khartoum in October meeting with the Sudan military just a day before the military ousted the civilian Prime Minister. Unclear is what role the Machiavellian Feltman played in the military move. Despite a subsequent reinstatement of the civilian Prime Minister Abdallah Hamdok, the Sudan military is clearly now in control. Tens of thousands of Tigray war refugees fled across the border to Sudan. Situation highly unstable.

On November 23 US Envoy Jeffrey Feltman made a visit to Ethiopia and after, he commented that Abiy told him he was confident he can push the Tigray forces back to their home region in the north of the country. Feltman said, “I question that confidence.” That’s a strange comment from a US Envoy who claims to demand the Tigray forces withdraw from the territories they have gained. Were the Biden Administration serious about supporting the elected Abiy Ahmed government and preventing disintegration of Ethiopia they would clearly do more to make that happen.

In all this geopolitical spaghetti bowl there is also the case of the growing presence of China in the Horn of Africa where it has welcomed Eritrea into its Belt and Road Initiative and established a military naval base in Djibouti alongside a critical US base Camp Lemonnier, and gained a major share ownership of Djibouti’s container port, Port of Doraleh, via its state-owned China Merchants Group. Djibouti is also a participant in China’s BRI. Djibouti controls access to both the Red Sea and the Indian Ocean, and links Europe, the Asia-Pacific, the Horn of Africa, and the Persian Gulf. It lies directly across the Bab el-Mandeb Strait from Yemen and is Ethiopia’s only sea trade link.

China has kept a low profile during the Tigray War but it suggests the potential of a New Great Game for domination of the region from the Horn of Africa to Egypt along the Red Sea. US covert backing for the Tigray TPLF and the role of Feltman in the region suggests that Washington once more is determined to wreak maximum chaos as it did with help of Feltman in Syria and the Arab Spring color revolutions.

Ethiopia: Assailed by Terrorists and Betrayed by the West

Ethiopia Conflict by US Design

On Ethiopia: ‘I’ve lost faith in everything “American”’