Why we are marching against racism 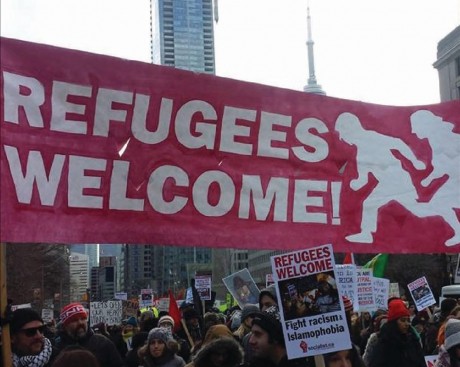 March 16, 2022 – From International Socialists
17 views
March 21 is the International Day for the elimination of racial discrimination and there are planned demonstrations around the worldon the day and on the previous weekend.
In Toronto, there is a rally and march on Sunday March 20 at 1:30 pm at the courthouse at University and Armoury, organized by Community Solidarity Torontowhich will then join with the Migrant Rightsdemonstration at City Hall at 2:00 pm.

These events are a much needed antidote to the rise of the far-right in Canada and come at a crucial time.

The far-right led convoy protests exposed a thread of racism and fascist thought that is gaining mainstream appeal and attention. The protests received a huge amount of sympathetic media coverage and were openly endorsed and enabled by politicians and police in Canada. We need a mass movement to push back against the gains of the right and against those forces that would drive a wedge between working people.

The Canadian state is one of the biggest promoters of racism through its own actions. The attacks on Indigenous Land Defenders from Wet’suwet’en territory to 1492 Land Back Lane are steeped in the racism of the colonial project in Canada.

Mass graves of children killed in residential schools are still being investigated and thousands of graves sites have now turned up. Our governments continue to push for the exploitation and pillage of Indigenous lands on behalf of corporate interests. We must oppose that process because it will result in both environmental destruction and increased racism against Indigenous people.

Globally the impact of climate change is being felt disproportionally by Indigenous people and those in the global south who hold little responsibility for the crisis. The IPCC report stated that 3.6 billion people – or about half of the global population – are in the danger zone as it is. The industrialized countries are mainly to blame for the highest emissions. Now Canadian oil and gas companies want to increase production to take advantage of the recent price rises in fossil fuels further adding to the destruction.

The pandemic has worsened racial inequality in Canada. The front line workers who have borne the brunt of the risks associated with the pandemic are in a majority, racialized workers. A recent study from Brandon University found that migrant workers and those who came to Canada under the temporary foreign worker program suffered from, ”overcrowded worker housing, poor access to medical care, and unsafe and unhealthy working conditions.” The City of Toronto found that systemic racism and discrimination resulted in poorer health outcomes for racalized people in Toronto – mainly because of a lack of access to health services. In many ways, the pandemic just exacerbated existing inequalities.

The war in Ukraine is exposing a new level of racism in our media and in broader society. There is a tremendous sympathy for the Ukrainian refugees – as there should be. But coverage of the refugees repeatedly mentions that the fact that those fleeing this war are white and European which means they are seen in a more sympathetic light than those refugees from Iraq or Afghanistan or Syria.

This discrepancy reminds us that Islamophobia – central to the Imperial aims of Canada and a major motivator of the far-right – remains a primary pillar in the racist framework of Canadian society.

We call for all refugees who are fleeing wars to be allowed into the country regardless of their point of origin. As most refugees are fleeing wars that the US and NATO partners like Canada started, we have an extra responsibility to call for the borders to open. ALL refugees welcome!

The interests of capital in Canada are clear. They want to continue to pillage the environment for profits – destroy Indigenous lands and peoples to expand fossil fuel production – hyper exploit front line workers to make even more billions and to use the fascist oriented ‘convoy’ protesters to push their agenda on the streets.

Governments across Canada are pursuing privatization schemes, planning austerity budgets and ignoring the massive increase in the cost of living from housing to food. Meanwhile Canadian capitalists are making billions in profits while prices skyrocket.

Central to this project of mass destruction is the tactic of divide and conquer. The rulers know that if they can keep us divided along lines dictated by racism, sexism, homophobia, transphobia and any other division at their disposal, they can achieve their aims.

While people targeted by such oppression bear the brunt of these attacks, working people of all racial backgrounds, religions or identity suffer the impact of oppression whenever it is allowed to run rampant because it weakens our collective resistance. That’s why we are marching to end racism. We need to join together to stop the onslaught of the planet destroying, warmongering fascists and we can only do that together!

On Joining the Military and Marching to the Left

USA: the struggle of the workers’ movement against slavery and racism (Part 3)

Midwest elections and the struggle against racism

USA: the struggle of the workers’ movement against slavery and racism, part 4