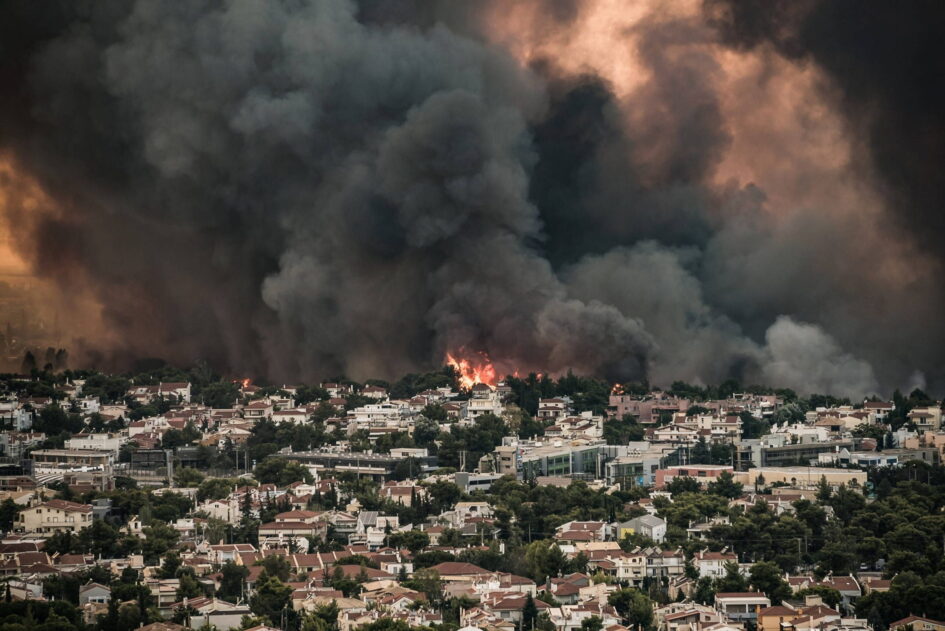 The immense destruction caused by the wildfires in Varybobi, Evia, and dozens of other areas of Greece is not solely due to the winds, high temperatures and climate change, as the ND government and the bourgeois media claim. The real cause of this catastrophe is the reactionary policies and the criminal indifference of the Greek ruling class.

Read the original in Greek

The current government was well aware of the new data on the increased risk of fires created by climate change, which is due to the barbaric and parasitic nature of the capitalist system it serves. But it did not take any substantial measures to prevent the catastrophe.

NOW – People evacuated by ferry from raging wildfires in #Greece.pic.twitter.com/fh8B0WaGW0

The Greek state in 2021 occupies the first place in NATO in terms of its total military expenditure as a proportion of GDP, at 3.82 percent. This demonstrates the priorities of the Greek ruling class: financially rewarding itself and its cronies, amassing weapons and strengthening state repression against any protest. Forest protection and firefighting are a waste of money in the eyes of the ruling class.

The hypocrisy of the Greek bourgeoisie is expressed through the words of government officials at this time: “Let everything be reduced to ashes, as long as human lives are saved”!

As a matter of fact, a volunteer firefighter has already been killed while battling a blaze. As the fires rage on, there will doubtlessly be more casualties. And the government’s dismissive calculation does not take into account the broader impact of the fires on people’s lives. Already, over 1000 homes in the Evia region alone have been burned to the ground.

The government also does not factor in the destruction of habitat and animal life, nor the long-term effects on the health of millions of people due to air pollution.

But the youth and the ordinary working people did not remain idle. In many areas, they defied the government’s “suggestion” to evacuate and put up a heroic fight against the wildfires without any help from the state. This struggle and solidarity was responsible for saving whole villages, which would have burned to the ground if left to the hands of this criminal government.

Hundreds of people in Greece are rescued from an island near Athens to escape wildfires https://t.co/qPq6vj2Gqj pic.twitter.com/mMPPqbfcE8

Against this cynical and criminal attitude of the Greek ruling class and its government, the workers, the youth and their mass organizations must fight for the following demands:

Down with the criminally indifferent bourgeois government, which is responsible for these catastrophic fires! For the election of a workers’ government that will make forest protection and firefighting a top priority, taking all the necessary measures as part of a socialist policy of expropriating the capitalists and establishing a centrally and democratically planned economy.