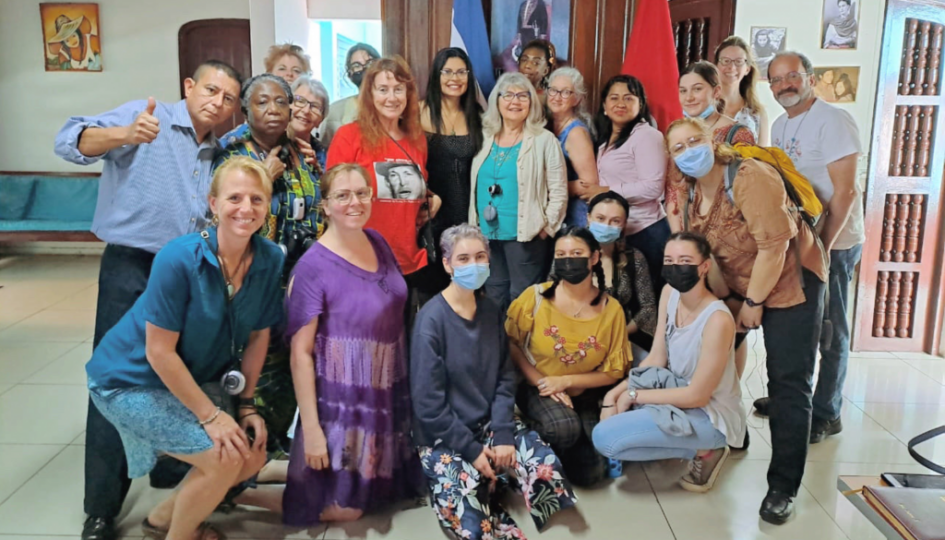 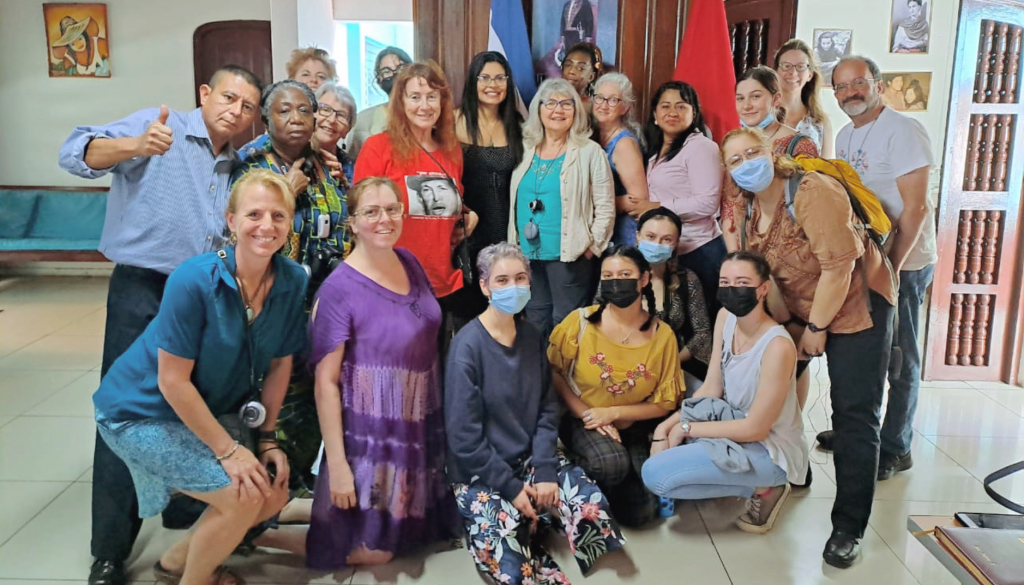 Hailing from all corners of the United States and Canada, 22 delegates ranging from the ages of 10 to 80 traveled to Nicaragua from January 7-16, 2023 to investigate the conditions and the lives of Nicaraguan women on a delegation organized by the Jubilee House Community – Casa Benjamin Linder and Alliance for Global Justice. We had the opportunity to meet with a plethora of community organizers, workers, and public officials: from peasant feminist farmers to self-employed unionists; from urban community health workers to nurses and doctors; from battered women’s program directors to women leaders in the police, National Assembly, and Ministry of Women. We met with Nicaraguans from all walks of life and heard their stories of resilience and empowerment despite two hundred years of imperialist aggression and efforts to undermine their sovereignty. With the lowest crime rate in Central America, we found Nicaragua to be a safe, welcoming place that prioritizes the human rights and needs of its people.

We were inspired by the power and protagonism of Nicaraguans and particularly Nicaraguan women and their participation in their communities and governments. Over the past 16 years, the Sandinista government has promoted proactive, preventive, and community-based programs that prioritize the needs of women, children, and the marginalized. The World Economic Forum’s Global Gender Gap Report of 2022 ranks Nicaragua 7th worldwide for gender parity and first in women’s educational attainment, literacy, and women in parliament and cabinet positions. These accomplishments reflect the Sandinista government’s investment in its people, with 57% of its budget dedicated to health and education. Since 2007, when the Sandinistas were reelected, the wellbeing of the Nicaraguan people has improved significantly: infant mortality was reduced by 55% and maternal mortality by 66% by 2021. During the COVID-19 pandemic the country has never shut down, but has used public health and popular education methods to keep deaths to 37 per 1 million population (in the United States 3,260 of every 1 million residents have died). Today, around 90% of the population two years and older has received at least two doses of vaccine, the Nicaraguan economy has continued to grow, health and education services have not suffered, and the country has avoided incurring excessive debt like many of its neighbors.

The Sandinista government implements a rights-based framework for policy-making that provides the mechanisms for all people to actualize their human rights to water, housing, education, health, safety, and food. In 2007, under the U.S.-backed neoliberal government, 24% of youths had no schooling. By 2020, that had dropped to 4%. In 2006, one in four people were illiterate. Today, less than 3% of the population is illiterate. Nicaragua is now virtually food self-sufficient, growing practically everything needed to feed its population.

These strides in social indicators are also thanks to the Sandinista government’s community-based model of participation in civic life that empowers all sectors of society and leaves no one behind: often referred to as “el pueblo presidente” (meaning, “the people are president”). More than 600,000 land titles have been provided to peasants since 2007 (55% of them women), and about a third of the national territory has been legally deeded to 304 Indigenous and Afro-descendant communities. As a signatory to the Universal Declaration of Human Rights, Nicaragua has passed laws to guarantee women equal rights, free healthcare and education, and 50% political representation, requiring that half of candidates for elected office be women.

We saw with our own eyes Nicaragua’s significant investments in infrastructure that have notably improved the lives of its people and particularly women, notably:

Witnessing these achievements firsthand has brought to light why Nicaragua is the “threat of a good example.” Nicaragua’s leadership in adaptability, creativity, sustainability, and popular democracy proves that another world is possible: one freeing itself from the grip of global capitalist hegemony and predatory imperialism through the empowerment and promotion of the rights of all people. It’s for this reason that the United States and its corporate stakeholders continually seek to demonize Nicaragua and undermine its advancements.

The people we met encouraged us to ask our government to respect their country’s sovereignty and their right to a life of dignity, self-determination, and peace. As we approach the 200th Anniversary of the Monroe Doctrine, we strongly urge the Biden Administration and Congress to lift all sanctions imposed on the Nicaraguan people and government. And we urge our fellow North Americans to visit Nicaragua for themselves to enjoy her many beautiful tourist attractions and learn from the example of the Nicaraguan people.