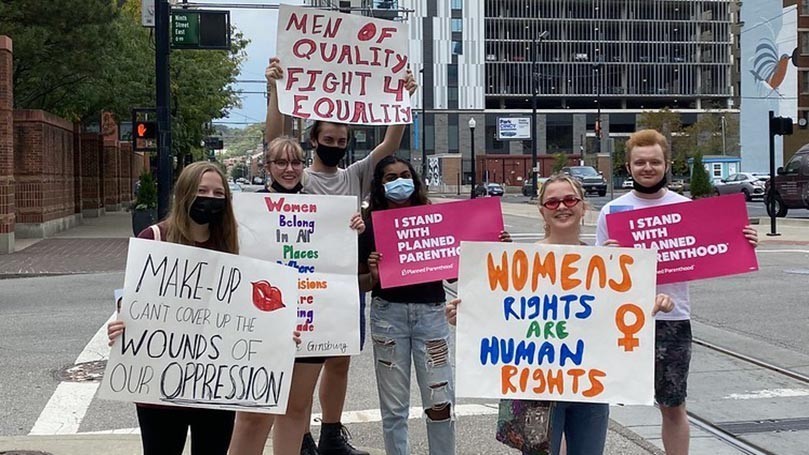 On October 2, tens of thousands of women and their allies marched to defend women’s reproductive rights in cities around the country, including Washington, D.C., where marchers took their message to the steps of the Supreme Court: Hands off Roe v. Wade! Over 600 marches took place in this massive effort organized by about 200 organizations to respond to the Supreme Court–sanctioned (for now) Texas law banning abortions past six weeks. (On October 7, a federal judge issued an injunction blocking enforcement of the law.) The CPUSA was there, too, carrying our banners and shouting our support for women’s rights.

The immediate significance of October 2 is that the marchers signaled state and federal governments that we’re angry about having rights taken away, and we’re not going to put up with it. Marching tells other Americans who agree with abortion rights that they’re not alone. A Pew Research Center poll taken this year shows that 59% of Americans support women’s right to have an abortion in all or most cases. And marching with the like-minded simply feels good. For a moment, we’re unified, we’re loud, and we’re demanding, not asking. Perhaps most important, though, is that marches galvanize the younger generations into action.

The marches and rallies were small compared to the Black Lives Matter marches of 2020 and the Women’s March of 2017. But that they happened is big, as they represent a regathering of the democratic movement.

People were prompted to act because the right to access abortion is a life-and-death issue. Dr. Ghazaleh Moayedi, an abortion provider, wrote an op-ed in the New York Times where she described the increased dangers pregnant women are in, now that the Texas law has gone into effect. Since abortion is permissible after six weeks only if the woman’s life is in immediate danger, preventive care is not an option. She writes, “I can think of no other area of health care in which we would wait for someone to worsen nearly to the point of death before we offered intervention. It’s just unconscionable.”

The right to control one’s body is also a civil rights and human rights issue, akin to voting rights, also under attack by the Right. It’s a fundamental inequality that one’s home address determines whether a woman has access to abortion, a senior citizen can easily vote by mail or a formerly imprisoned person can vote at all, or a poor person can get health care through Medicaid.

The long-term importance of October 2 will depend on what happens next. We’ll have to wait and see if October 2 is a defining moment like January 21, 2017. That march led to an explosion of electoral activity in which voters took the House away from the GOP, brought in the “Squad” (AOC, Tlaib, Pressley, Omar) which has since expanded to six progressive representatives, and, with the Black Lives Matter movement, unions, and voting rights and civil rights groups, defeated Trump.

In the end, marches are not enough, whether they are spontaneous or planned months in advance. Some marchers understood this, carrying signs calling for the end of the filibuster. Political processes are important too. After all, if the Supreme Court hadn’t shift to the right, thanks to the election of Trump, the Court would have swatted down Texas’ law like an annoying fly and October 2 might have been just another day.

Resistance must be organized — on the streets but also in workplaces and neighborhoods. Many tactics are needed to reach the greatest number of people and convince them to fight for their rights. Resistance also must be organized with an eye on the 2022 elections and the Senate races.

When the House passed the budget bill this year, they omitted the Hyde Amendment, which bars federal funding for most abortions and has been included in every budget since 1977. In September the House passed the Women’s Health Protection Act, which would protect abortion services countrywide. Of course, it doesn’t stand a chance in the Senate, which makes next year’s elections important. Republican senators from Wisconsin and North Carolina, for example, are up for re-election or are retiring, and these elections are considered competitive. Also at stake are governors’ races in Arizona, Michigan, Pennsylvania, and Virginia, among others.

In the meantime, let’s keep marching. It’s good for our mental health and the political health of the nation.