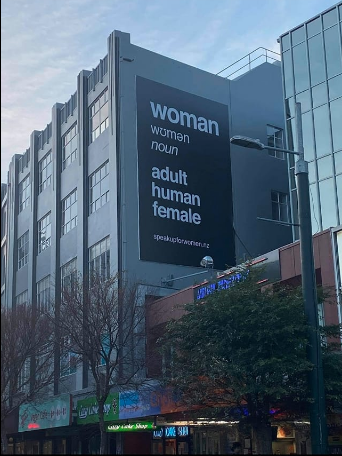 Speak Up for Women have just published this press release:

After just 24hours, GO Media have pulled down a billboard which displayed simply the dictionary definition of the word ‘woman’ along with the website address speakupforwomen.nz.

Despite a recent High Court judgement declaring that Speak Up For Women cannot rationally be described as a ‘hate group’, the same vexatious complainants who have been harassing the women’s group for years have managed to bully a media company into bowing to their demands.

“We’ve been here before and I won’t lie, it is exhausting. We have made it clear from day one that our issue is with law and the conflation of sex and gender. We have never wished harm on trans people and quite frankly, if these activists have proof that we have it is time they shared it, Speak Up For Women’s spokesperson Beth Johnson says.

“We are told that these activists speak for the most vulnerable group of people in the world, but the power they wield in local and central government indicates that they are simply a powerful lobby group. They certainly don’t speak for the trans people who have shown up to our events in support of our position.

“Told by their lawyers that they cannot shut down our event, three Wellington Councillors – including the Mayor Andy Foster – have decided to use their positions to have the location of our event lit up in trans flag colours. We would have no issue with this were it individuals exercising their own freedom of speech, but this is the power of the council trying to intimidate us again.

“We are just a growing group of women who want to discuss our legal rights. We are not seeking to harm anyone and in fact are simply advocating that the existing law should remain. We are bullied, silenced, and intimidated by people who are never challenged to supply proof of our ‘crimes’.“We will not shush. We will hold our event. We will continue to advance conversations about the law and how we can deal with the tensions between biological sex and gender identity in practice.”