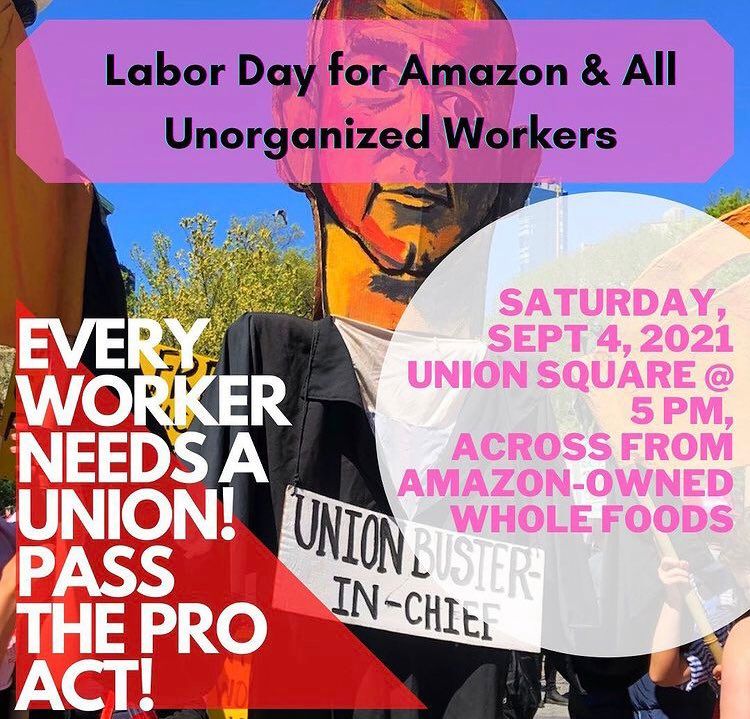 On Labor Day weekend, show solidarity with Workers Assembly Against Racism, Chris Smalls and workers fighting to organize Staten Island’s Amazon facilities. They are demanding union rights, passage of the PRO Act and a permanent eviction moratorium. Join them at their rally at 5:00 p.m., Saturday, Sept. 4, at Union Square across from Amazon-owned Whole Foods in Manhattan.

Since New York City’s traditional Labor Day parade was cancelled, activists have called for this Labor Day rally to demand union rights for Amazon workers, as well as passage of the PRO Act.

With the U.S. Supreme Court decision striking down the eviction moratorium mandated by the Centers for Disease Control and Prevention — and with the New York state moratorium ending Aug. 31 — the Sept. 4 rally will also include the all-important demand for a permanent eviction moratorium.

“The fight to organize the unorganized goes hand-in-hand with the fight against evictions,” Chris Smalls told this writer. The Amazon worker and whistleblower was fired by tech-giant bosses in 2020, for leading an Amazon warehouse walkout over unsafe work conditions.

Smalls added: “Here in Staten Island, some of the Amazon workers we are trying to win a union for are unhoused. Some have been sleeping in their cars in the Amazon parking lot.” Smalls is central to efforts by Staten Island workers to build their own worker-led union, Amazon Labor Union.

This Sept. 4 action was called by WAAR, which organized a series of dynamic New York demonstrations over the winter — in Harlem, in Union Square and outside Jeff Bezos’ penthouse — supporting the Amazon union drive in Bessemer, Ala.

Organizers emphasize that, since Labor Day is dedicated to workers rights, Saturday’s Union Square rally will call for an extension of federal unemployment benefits. The payments — set to expire Monday, Sept. 6, the federal holiday — will in reality expire Saturday, Sept. 4 — the day of the rally.