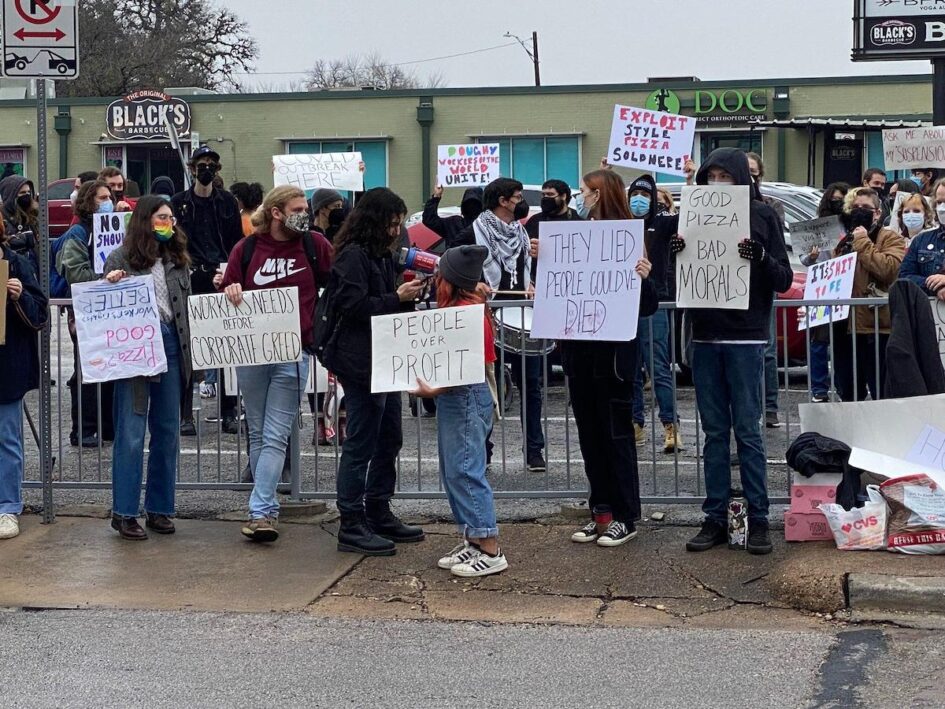 Employees of Austin, Texas-based pizzeria Via 313 and their supporters protested on Jan. 8 for better sick pay, better COVID-19 protocols and transparency in the company’s management of worker health. Protesters also demanded the reinstatement of four employees who were suspended by Via 313 management after presenting a petition to redress these grievances. Three of the employees were subsequently reinstated.

Via 313 claims that the four were suspended for creating a “hostile work environment.” But the facts do not bear out this version of events. In the event in question, employees attempted to deliver the petition to Vice President of Operations Michelle Dahse. A recording obtained by the Austin Chronicle proves that no one threatened her or even raised their voices, but Dahse claimed she was “intimidated with a group of people with angry looks on their faces handing me a list of demands…”

Via 313’s characterization of workers also ignores the work environment created by low wages, lack of testing and contact tracing and lack of paid sick leave. As of Jan. 8, fifteen employees across multiple Via 313 locations had contracted COVID-19 in the preceding two weeks and workers felt pressured to work while sick in order to afford their expenses. This trend matches what former bartender/server Cameron Kerr described to KXAN: “We’ve had people at other stores being basically pressured to come back to work when they are COVID positive, and that’s just absurd. They’re putting everybody — employees and customers — at risk.”

Employee Elyana Calle said that Via 313 “[doesn’t] have any system that they [enforce] widely across the stores to notify their employees if they work with someone who is contagious or who had the virus. That created a bigger staffing issue than we already had before… I worked with someone who tested positive a day later and I did not hear anything from my managers. I only heard about it from my coworkers. That’s not how it should be happening.”

The company is presenting itself as totally safe for business while the Omicron variant rages. By pressuring employees to continue working even after contracting COVID, Via 313 — not the fired workers — are creating a hostile work environment.

Paid sick leave is not an issue that is limited to Via 313 by any means, disproportionately affecting the service industry. The City of Austin passed a paid sick leave ordinance in 2018 that would have required employers to allow workers to accrue 64 hours of paid sick leave per year.

The ordinance was killed by the state court system, which responded to pressure from the Texas Public Policy Foundation and the Austin Independent Business Alliance. AIBA and its members are aggressively against requiring paid sick leave. The coalition of right-wing, anti-worker “small businesses” challenged and killed the paid sick leave ordinance by early 2020 — just in time for COVID-19 to devastate Austin’s working class.

While Via 313 was not associated with the AIBA, they have been just as hostile to basic worker protections.
The protest is part of a larger trend of renewed, militant labor activity across the country. On Jan. 13, nurses across 12 states and Washington D.C. took to the streets to demand safe working conditions. Starbucks workers are unionizing across the country, and Colectivo Coffee Roasters are fighting to ensure that the hard-won union certification is not delayed any longer. The renewed union activity comes after a particularly charged month last year, known as “Striketober,” which won major victories for workers across several sectors of the economy. It is time for us to fight for labor power and build the union movement across Texas!

Photo: Via 313 workers and supporters rally outside one location of the restaurant. Credit: Austin Sanders.