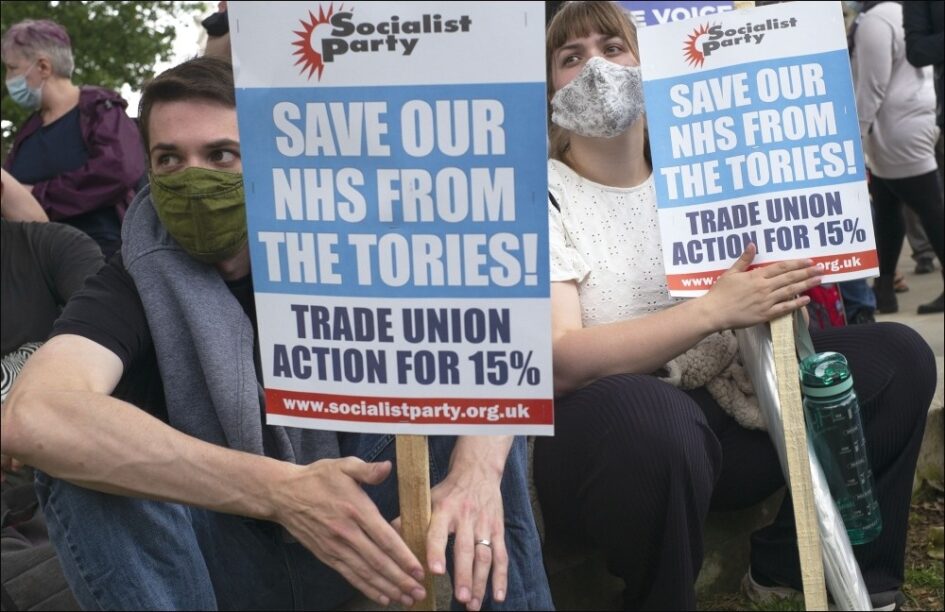 From The Socialist newspaper, 13 October 2021 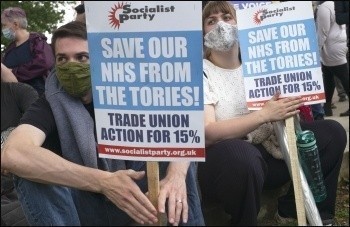 After a decade of austerity, followed by a devastating pandemic and with prices rising – workers are ready to struggle for a pay rise. Health unions Unison, RCN, Unite and GMB ran ballots on the 3% NHS pay offer over the summer, and all came back with a resounding rejection and a willingness to fight. While Unite and the GMB have signalled their intention to move to industrial action ballots, Unison and the RCN, which organise the most health workers, have both announced they will hold indicative ballots first.

Meanwhile, in local government there has been another overwhelming rejection. In this case, Unison has agreed to move straight to an industrial action ballot. In the National Education Union, the leadership has come under pressure to agree to launch a campaign on pay, including potential strike action.

Every union must fight its own battle, but coordination makes the fight so much stronger. We call on the Trades Union Congress (TUC) via its Public Sector Liaison Group, and the public sector unions, to come together to plan a campaign, including a national demonstration and coordinated ballots for national strike action. With a recently elected left national executive of Unison and Sharon Graham as the new general secretary of Unite, there is the basis for a militant fightback.

A fight in the public sector will be a big boost to private sector workers. Worker shortages in some sectors may mean pay rises – and workers should organise in their unions to press their advantage. But across much of the private sector workers are struggling on low pay and many have been forced to organise strikes against ‘fire and rehire’. In fact, October has seen a step change in industrial action, with a number of strikes winning demands or at least forcing concessions out of the employers. Many of these workers joined Youth Fight for Jobs protests on 9 October, campaigning for a minimum wage of £15 an hour (see page 10).

The TUC agreed a resolution at its recent conference to organise a national demonstration in the spring with a campaign of rallies around the country in the build-up. Let’s make sure that happens, and to put fighting together for a pay rise at the heart of it.

This is a warning to those outside of London and the South East of England of what the Tories’ ‘levelling-up’ project will mean – there will be a tiny minority of very rich people in an area, but widespread poverty and unaffordable housing for most.

In my work for a local authority, I sometimes work alongside care workers from private companies. These workers, usually migrant women workers, are often paid minimum wage and have to work multiple jobs to make ends meet. One well-paid job should be enough to live on in any civilised society!

Wherever we live, we need to be paid enough or receive enough in benefits to fully participate in our local communities – under capitalism this is impossible for working-class people anywhere.

Members of my trade union, Unison, have just voted to reject an insulting 1.75% pay ‘rise’ for local government workers and we are going to ballot soon over industrial action. Let’s vote for this and strike with other trade unions to collectively turn the tide on decades of declining pay for working-class people.

I think there is an expectation that when you go to work in healthcare, you are taking on a sacrifice for the greater good. We do it because we do want to support our community. But management exploit this good will – we are staying late, doing unpaid overtime, expected to take up shifts at short notice, to never be sick, and to accept whatever we are paid.

Unless you are a doctor in a private practice, the pay we get is minimal, even as a doctor, let alone porters, carers, kitchen staff – all the people that make the health service run.

During Covid, the level of sacrifice increased. I had to move out of my house and live in a hotel for six weeks because my partner is high risk. Initially the government clapped us, but that was the only real support, and now the 3% pay offer. We are made to feel like: “How dare you ask for more!”

But the evidence is there in the statistics about how little workers get paid, how long the shifts are, and the rate of burnout. The average nurse only stays in the job for about seven years. There is a nurse shortage and a doctor shortage. I see it every day, working on wards with skeleton staff, it almost seems normal. Actually, we should not accept running at these staffing levels.

A pay increase in itself is really important. But it is just the beginning of what is needed. We need a good healthcare system – to get that we need well-paid, well-respected staff to run it. I feel like the government is taking advantage of me and my colleagues’ good values. They cut budgets and we have put up with it because of how important the healthcare system is.

Striking feels hard because it potentially puts patients at risk, but our current system is putting patients at risk with chronic under-staffing. If enough health workers vote for action, with support from the wider public, we can win a decent pay rise.

1% for any frontline key worker is an insult. A 1% pay rise is a pay cut in real terms and comes after years of decreasing pay. But 1% is what further education (FE) workers have been offered.

The side of FE that is not widely known is that we help support students that are homeless, living in poverty, experiencing domestic abuse and in crisis. The ruthless cuts to services, and now the cut to Universal Credit, have left educators picking up the pieces yet again. Teachers and support staff in FE, like many schools during the pandemic, are among those delivering food parcels.

No FE professional should be on a sub-standard, term-time only contract, but this is all too common. The pay for all should reflect level of responsibility and permanent contracts offered to ensure workers’ stability.

The money is there for this, and for a pay rise for all workers. The government shamelessly takes more and more, like they have with the increase in National Insurance, while we’re expected to settle for less and less.

FE colleges are underfunded by government, but otherwise run like businesses in a marketised system. Bosses squeeze wages to balance the books. Workers in some college groups have already taken strike action for a pay rise this term (see page 6 or 7). We need a pay rise across the whole sector. If it takes nationwide strike action to achieve that, we have no choice.

The probation unions have decisively rejected the government’s pay freeze. In indicative ballots Napo, Unison, and GMB members voted to reject by an outstanding 99%, 98%, and 86% respectively. Napo indicated the ballot had a high turnout in an email to members, which isn’t surprising. Probation workers have endured working through the pandemic while facing a myriad of issues with the reunification of probation. That’s after five years of the government and private companies ransacking the probation service to save money and boost profits, leaving staff overworked and service users at risk. Probation workers are drawing a line.

The unions’ leaders must use this result to its full advantage, and begin building for co-ordinated industrial action. The Tories won’t budge without it. No business case for a pay rise will stop them, neither will emotional pleas, or lame threats to ‘expose them’ in the media, as Trades Union Congress leader Frances O’Grady called for last year. The most effective weapon workers have is to strike, and right now workers need the political leadership to use that weapon.

Probation workers have fantastic ideas for the future of probation; they shine through in Napo AGM motions. Replacing the bureaucratic National Probation Service with a properly funded probation service with democratic community control, as part of a socialist system and not a chaotic capitalist one, could give real life-changing help to offenders and give probation workers a decent working life.

Probation workers have made their views clear. Now, the union leaders must build a serious campaign. Take the campaign into branches, build morale, hold rallies and protests, make a victory over the Tories the utmost priority. A sincere cross-union campaign can smash the pay freeze and have the unions set the agenda in the period ahead!

We need a pay rise!

Fight for the pay rise we deserve

Who runs Unison: lay members or the paid officials?

Place Unite at the head of the anti-Tory movement

The ‘winter of discontent’ – When workers could take no more

March to save Stratford arts jobs from Newham Labour attacks

Newcastle United takeover – no to billionaire Ashley or Saudi despots