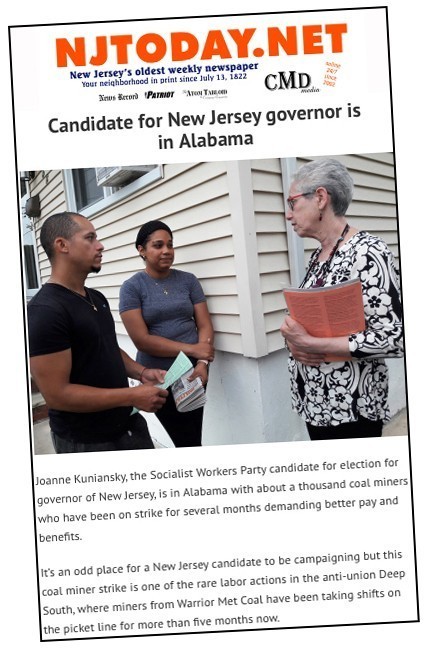 Socialist Workers Party candidates and campaign supporters are taking the party’s working-class politics far and wide, exchanging views and experiences with working people on their doorsteps, at strike picket lines and social protests.

Workers and farmers are seeking ways we can get together to defend ourselves and overcome divisions bosses try to use to weaken us. SWP campaigners explain why it is necessary, above all, to build a revolutionary party that can lead millions to overturn capitalist rule, establish our own workers and farmers government, and carry through a socialist revolution.

Miners “work too hard to get out the coal,” Kenny Hyche, a retired auto mechanic, told Joanne Kuniansky, Socialist Workers Party candidate for governor of New Jersey, and campaigner Susan LaMont when they knocked on his door in a mobile home park in Cottondale, Alabama, Aug. 3.

He agreed with Kuniansky when she said workers need to fight for control over production and safety. Hyche is a supporter of the strike by members of the United Mine Workers at nearby Warrior Met Coal. He knew about the strikers’ solidarity rally that LaMont and Kuniansky were going to join the next day.

“My son-in-law was killed at the No. 5 mine when the explosion happened in 2001,” Hyche said. Thirteen miners were killed.  “Miners and other workers must be able to refuse to work if conditions are unsafe,” Kuniansky said.

“It’s important for workers to get vaccinated and our unions should organize to encourage and help workers to do so,” the SWP candidate added. “We need to get back to work, so we can organize together and fight to improve our conditions.”

“That’s right,” Hyche said with a smile. “It feels good to go to work, instead of just sitting at home alone, worrying about how to pay your bills.”

Kuniansky showed Hyche the statement she recently released, “For unconditional recognition of Israel! Protest every time Jew-hatred raises its head!” which is available on the Militant’s website. “The Jews have been going through a lot for years and years,” he said. He decided to subscribe to the Militant.

“We could have prevented the spread of the virus if we had vaccinated everyone earlier and given the vaccine to poor countries around the world,” high school student Marcus Connelly told Dennis Richter, Socialist Workers Party candidate for governor of California, as Richter campaigned Aug. 5 near the entrance of a Los Angeles Walmart where he used to work.

“Those in power don’t think like you and me,” Richter said. “They have different morals. They prioritize making a profit out of everything, including a pandemic. The opposite is the case in revolutionary Cuba, where the government has produced effective vaccines and offered to share them with other countries.”

Connelly told Richter his brother had been fired from a fast-food restaurant after breaking his arm on the job. “We need to rebuild the union movement,” Richter said. “A union with its members involved in the fight to work safely can make the slogan ‘No worker has to be injured or killed on the job’ a reality.

“And we can fight together to raise wages,” the SWP candidate said, “and win cost-of-living raises,” so that our wages automatically go up to match every price increase.

James Jones, a member of Carpenters Union Local 213, talked with Richter about the need for workers to build and strengthen our unions.

Standing nearby was Michael Reed, a retired mechanic. “I liked what I heard you say to those fellows about unions,” he told Richter. SWP candidates don’t say, “I’ll take care of everything,” Richter told him. “The only time we win anything is when we rely on own strength. The trade unions have great power, if we organize to use them, and act independently of the capitalists’ parties.”

Many, including two former Walmart co-workers of Richter signed cards to endorse the SWP campaign and eight people got copies of the Militant.

Richter is the only working-class candidate among 46 certified for the ballot in the Sept. 14 election. By luck of the draw, Richter’s picture and biography come first in the candidates guide printed by the state.

David Rosenfeld, Socialist Workers Party candidate for City Council in Minneapolis’ Ward 12, reports that he and Doug Nelson, SWP candidate for mayor, have been placed on the ballot.

The party is opening a new storefront campaign headquarters in Northeast Minneapolis.

To find out more or to join the SWP campaigns, contact the party branch nearest you. See directory.