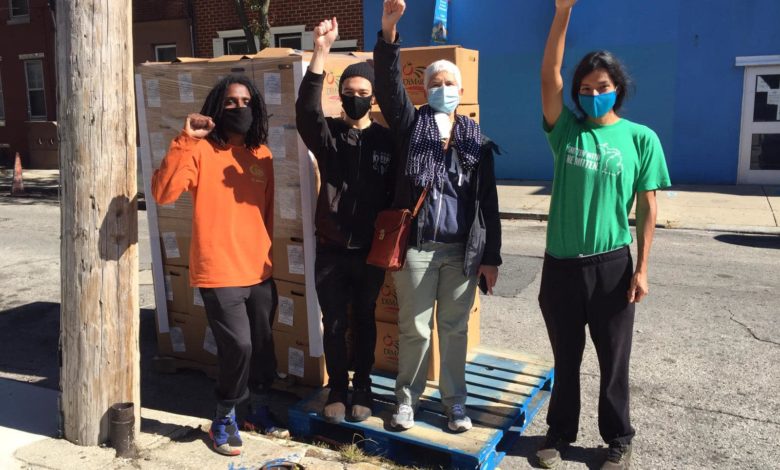 Photo: US Program volunteers with boxes of food

Pennsylvania governor Tom Wolf joined with Feeding America, the second largest charity by revenue in the country, to recognize September as Hunger Action Month. While Governor Wolf pays lip service to the fight against hunger, the state government has done nothing extraordinary to solve the problem despite having enormous resources.

There is no doubt that state-supported food pantries provide much needed relief. But, they act as band aids for the massive social problem of hunger. With ever-changing funding sources and government rules, many of the food pantries in the city of Philadelphia are stuck with unclear hours and long lines.

Understanding that the deficiencies of the food pantry system were about to become crystal clear, at the beginning of the COVID-19 pandemic PSL members and community leaders in Philadelphia set out to form an independent food distribution service. This project would not take state or federal grants and would be funded and carried out entirely by the poor and working class in the city. This program, the Unity & Survival program, went on to feed 1,000 families monthly for a year and a half.

A documentary on this program was just released by BreakThrough News the same day that Governor Wolf recognized “Hunger Action Month.”

Ironically, as the Governor recognized Hunger Action Month, food has become harder to access. Pantries in Philadelphia like Philabundance still have large amounts of food in their warehouses. Our neighbors are still going hungry. But these big warehouses don’t mass distribute their food or drive it to groups that want to distribute it. Instead, groups that want to pass out mass amounts of food are expected to rent or buy a truck to transport food. This is an expensive barrier to food that otherwise just sits.

Additionally, now that the city and state view the pandemic as coming to a close, they will be expecting all food pantries to report the name and address of people receiving their food and to be willing to have their sites inspected by state agents. Recipients of the US Program would be by and large unwilling to provide their information to the state to receive food. Whether for immigration reasons or otherwise, people shouldn’t have to prove they are going hungry and sign papers to receive food that is otherwise going to waste in massive warehouses.

Going even further, the state will soon be prohibiting any and all political messaging from pantries. Without political education, food distribution is charity. Of course, major non-profits like Feeding America make no claim to be anything but charities — they are not aiming to overturn the social order that causes hunger. The cause of hunger is poverty — poverty caused by the capitalist ruling class and its policies — and so the only way to end hunger is by building a new society that has at its core meeting people’s needs. In other words, the only way to end hunger is through a socialist reorganization of society.

A socialist response to hunger during COVID-19 pandemic

The greatest accomplishment of the US program in Philadelphia isn’t the 100,000+ meals that were delivered. It is the network of community leaders across the city who came to learn with PSL members that given even the most meager of resources, the working class can band together to solve common problems. It provides an example of how socialists respond to the problem of hunger.

At the beginning of the pandemic, the difference between a socialist response and the capitalist government’s response was clear as day. While non-profits and city agencies closed their doors, socialists and community leaders sought out their neighbors and found out what they needed. Overnight, the US Program was formed in response to elderly neighbors who needed groceries but could not go to stores for fear of contracting COVID. With the needs of the neighborhood at heart, the PSL in Philadelphia began a mass crowdfunding campaign to launch the independent program.

This is an important difference between standard non-profit charity and socialist organizing: instead of expecting our neighbors to wait in lines and fill out forms, we took food directly to their home with their block captains. This strengthened connections block by block in the city and fostered solidarity among community members in place of the “everyone for themselves” attitude promoted by capitalism in times of crisis.

Political education formally and informally accompanied the grocery boxes across the city. From getting word out about news affecting the neighborhood to fighting gentrification and slumlords, the US Program politicized the connections that neighbors made with each other and created a base of Philadelphians who understand core concepts of socialism — everyone has a right to the necessities of life, and to get it we need to build working class organization.

The US Program shows how a socialist response to hunger is not just a band aid. Instead, responding to hunger means giving communities the tools and resources they need to build permanent organization by and for the working class and poor. It is on this basis too that the US Program will continue with or without grocery delivery. With a looming eviction crisis, the US Program has turned to building community associations capable of defending their neighbors from evictions. The very same networks which passed out 100,000+ meals are mobilizing now to sign people up for rental assistance, push Congress to pass an indefinite eviction moratorium, and spread the message that housing is a human right!

While the Wolf administration advertises its supposed support for hunger relief, US Program organizers know that no band aid will heal the wounds of poverty. It is only through building lasting working class organization that the tens of millions of poor and dispossessed in this country will rise out of the shackles of poverty and take power. We are working to build a mass movement of working class people ready to reorganize the world based on their needs and the needs of the planet.