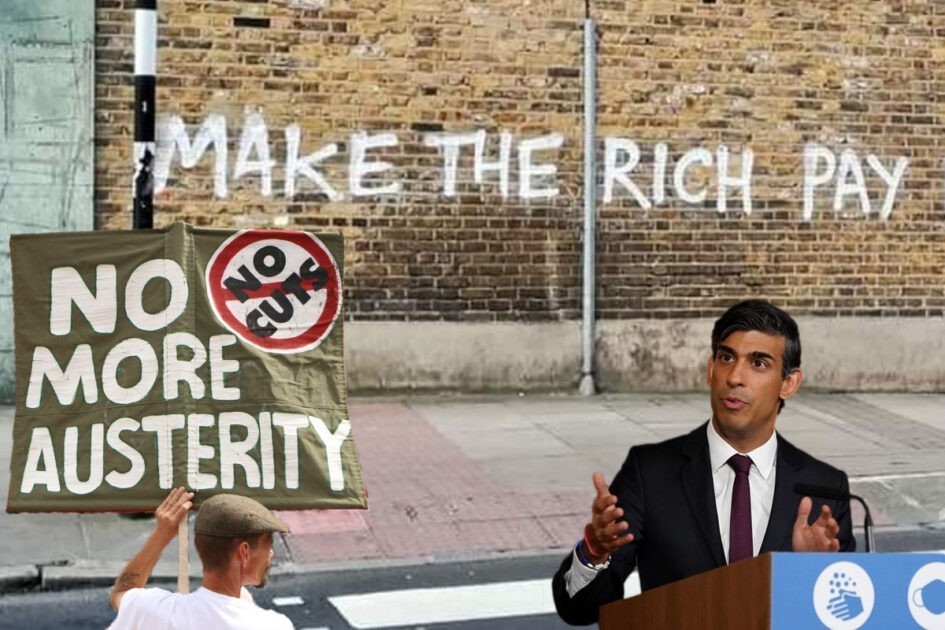 Millions of workers are facing an onslaught to their living standards over the next few months.

Despite the Tories proclaiming that ‘the age of austerity is over’, the reality is that workers’ incomes are set to be decimated through a combination of benefit cuts, tax rises, and inflation.

But whilst millions of workers are anticipating a bleak winter ahead, the bosses and bankers have never had it so good.

As usual, the ruling class is passing the bill for the crisis of capitalism onto the shoulders of workers and the poorest – all so that the 1% can continue to rake in fantastic profits, at our expense.

Cut to the bone

The Tories are ploughing ahead with their £20 a week cut to Universal Credit in October, in order to save the government £6bn per year.

This will plunge half a million people into poverty overnight according to the Joseph Rowntree Foundation, with more than one in three families affected by the £1,040 per year cut.

Single people under 25 who rely on Universal Credit will see their incomes plummet by 25%.

One such claimant, Zahra, told the BBC that after her bills and rent are covered, she currently has only £180 left for the month. But when the £87 per month cut is enforced, she will have under £100 a month to live on – less than £25 per week.

The Conservative Party – led by an Oxford Bullingdon boy, its Chancellor the richest MP, its Cabinet 65% privately educated, & funded by the super-rich – plan to cut Universal Credit & push 500,000 working class people into poverty.

The Trussell Trust estimates that nearly a quarter of a million parents claiming Universal Credit fear that they will be unable to put sufficient food on the table to feed both themselves and their children, once the cut comes into force.

Added to this, at the same time as this cut to Universal Credit, the Tories are winding up the furlough scheme. The latest estimates from the Office for National Statistics suggest that between 1.6-2 million are still furloughed, and therefore at risk of unemployment.

Whilst millions will have less in their pockets, the cost of living is also set to skyrocket.

The Bank of England expects inflation to rise to 4% by the end of the year, due to a combination of global supply chain disruptions and worker shortages. Already, some food items such as tomatoes have doubled in price over the past year.

Energy price rises in particular are set to hammer workers’ incomes. Last month, the regulator Ofgem announced it is lifting the maximum cap on default energy deals this winter by more than 12%. Around 15 million households are expected to see their bills soar by at least £139 per year as a result, pushing half a million households into fuel poverty.

Yet the Big Six energy companies are already raking in the profits. British Gas, for example, more than doubled its profits for the first half of the year, to £172 million.

• Energy firms that make profits should not be allowed to raise energy bills above inflation.

• And better still, energy firms should be brought back into public ownership.

So whilst thousands will be faced with the choice of heating or eating this winter, the fat-cat bosses of Britain’s energy firms will be rolling in money.

To top this all off, the Tories are planning on raising National Insurance contributions in order to increase funding for the NHS and social care. In other words, it is workers – and the poorest workers, in particular – who are having to shoulder the brunt of the bill.

Others who are doing extremely well from the pandemic include the world’s bankers, who have never had it so good. Goldman Sachs, for example, reported its highest ever profits this year – totalling over £9bn for the first six months!

HSBC likewise reported a £4.2bn profit in the first quarter of this year – a near 80% rise.

So whilst we’re told there’s no money for welfare, healthcare, or education, clearly the wealth does exist in society to fully fund all these things, and more.

By presenting the bill for the crisis to the working class, the Tories are preparing the ground for a social explosion. Keir Starmer and the Labour right wing, meanwhile, offer no genuine solutions to those struggling to make ends meet.

We say: Expropriate the billionaires! Nationalise the banks and big businesses under democratic workers’ control in order to plan production for need! Make the bosses pay for the crisis!