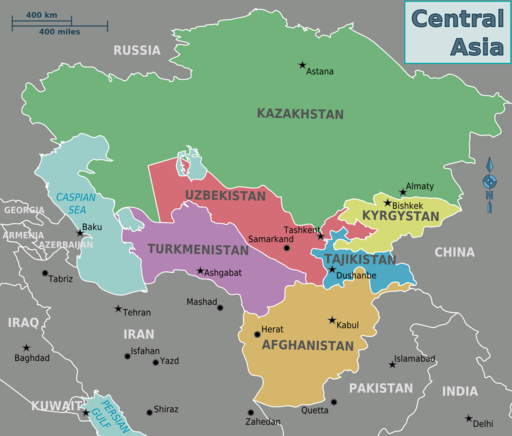 From the September-Octobrer 2021 issue of News & Letters

The nations of Central Asia and their neighbors.

The chaos at Kabul’s Hamid Karzai International Airport, as the U.S. military withdrew from Afghanistan, carried eerie historical echoes. The bodies of young Afghan men falling from planes, as they tried to escape Taliban rule, were as horrible as the images of workers falling to their deaths attempting to escape the burning twin towers on Sept. 11, 2001.

The brutal, nihilistic suicide bombing carried out by Daesh (the “Islamic State Khorasan Province”) on Aug. 26 also recalled that al-Qaeda atrocity of Sept. 11. This bombing took the lives of at least 170 Afghan civilians, along with hundreds more wounded, and killed 13 U.S. service members. A BBC report from the scene indicates that many of the civilians might have been shot, in the ensuing confusion and panic, by U.S. troops.

It is important to note this difference: while al-Qaeda functioned as a kind of colonial power in Afghanistan in 2001, Daesh recruited from educated, middle-class Afghan youth—the same class that the U.S. occupation was attempting to recruit for the now-fallen government of deposed President Ashraf Ghani. Ghani was a star of U.S. academia, known for his book on “fixing failed states” before fleeing with millions of dollars from the Afghan treasury.

When Daesh was in danger of being defeated by the rival, peasant-based Taliban in Jawzjan in 2018, Ghani’s forces airlifted them to safety. This class collaboration is one reason that Hazara residents of Kabul’s Dashte Barchi neighborhood blamed Ghani and Daesh for the May 8 bombing that killed 90 and wounded 240 at Sayed al-Shuhada school for girls. One said the government leaders were “busy with their own wheeling and dealing, they’re not concerned with the Afghan people, only their status.”

The continuing struggle for Afghanistan is not about “tribalism,” or the past—it is an up-to-date product of world capitalism. It is about state power and wealth. This is true whether we consider the remaining influence of Ghani’s Islamic State, which did raise the educational level, and sometimes status, of women; or the continuing threat of Daesh, with its “Caliphate’s” appeal to disturbed and nihilistic urban youth; or the prospect of rule by the Taliban’s Emirate with new diplomatic recognition from China, Russia, and Iran.

It is impossible to view this situation apart from the vast changes that have taken place in world capitalism since the Taliban rule between 1996 and 2001. The changes in Central Asia, in particular, have been profound.

Whereas in 2001 the Northern Alliance, a group of anti-Taliban militias made up of Tajiks, Uzbeks, Hazaras, and Pashtuns, were able to receive military aid from regional powers, today the Central Asian states are more willing to deal with whoever is in power in Afghanistan. The discovery of trillions of dollars in mineral wealth changed the equation. This includes millions of tons of copper (leased by Chinese companies); iron ore; gold, aluminum, tin, lead, and zinc. The country also has large deposits of lithium and rare earth metals needed in high-tech military and consumer electronic products, along with some oil and natural gas deposits.

The “Afghan Resistance” that has appeared under Ahmad Massoud in largely Tajik Panjshir province has appealed for support to the government of neighboring Tajikistan. Yet Tajikistan is under Russian influence, and unlikely to provide more than words—as Russia and China have declared their interest in a stable Afghanistan to further the Belt and Road Initiative and Eurasian project.

This led an Uzbekistan newspaper to describe the situation as good cop (Tajikistan), bad cop (Russia) diplomacy. Russia, however, has hedged its bets, also recently holding military exercises with Tajikistan, Uzbekistan, and Kyrgyzstan aimed at applying the “lessons” learned from its genocidal role in Syria to any possible turmoil in Afghanistan.

China has an interest in seeing that a Taliban Emirate would observe the same obsequious silence toward its genocidal oppression of the Muslim Uyghurs of its Central Asian Xinjiang province that has been observed by the Islamist toadies in Iran, Pakistan and Saudi Arabia. It has granted early diplomatic recognition with this understanding, which will be emphasized by China’s ally Pakistan, long-time patrons of the Taliban.

When the U.S. invaded Afghanistan in 2001, Vladimir Putin had just been elected to his first full term as Russian president. He had yet to consolidate power. The Chinese economy was only a fraction of its current size. The Central Asian states were in various stages of hangover from the dissolution of the Soviet Union.

For a decade the U.S. imperialist project was defined by its occupation of Afghanistan, and its subsequent war in Iraq. During Obama’s administration, this began to change to a focus on confronting imperialist rival China in the Pacific—a move continued under Trump and Biden. Like Afghanistan after Sept. 11, this is presented as being defensive, but under capitalism and imperialism it will end as badly—or infinitely worse.

In the end, U.S. imperialism has only succeeded in creating a new imperialist alliance between Russia and China, at the cost of countless lives and much treasure. China’s economic penetration of Central Asia, Russia’s military alliances, and the incorporation of reactionary Pakistan and Iran’s genocidal regime are all morbid symptoms. The current bloody debacle in Afghanistan should be a death certificate for the current world order.

Nuclear Arms Race in the Asia-Pacific Region: Denuclearize as Solidarity with the People of Hiroshima and Nagasaki