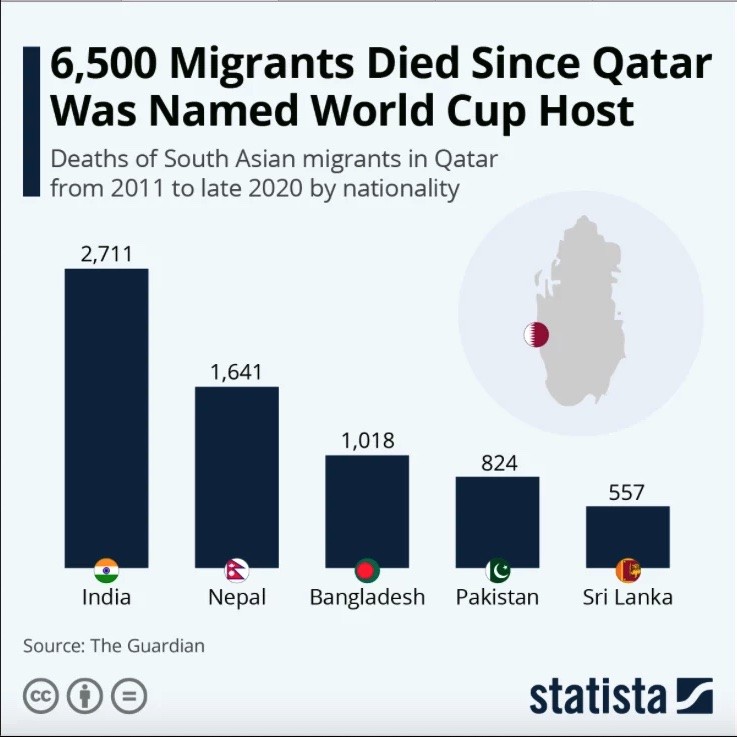 In the end, this is just a big prison where you can work. Nobody would be here if they had any other option, and Qatar knows it. What we are seeing here is modern slavery. 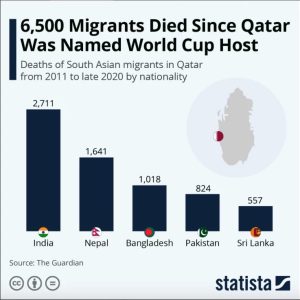 In 2010 Qatar, through bribery and corruption, won the right to stage the recently completed 2022 World Cup. In the dozen years before the tournament, seven huge new stadiums were built at the cost of hundreds of billions of dollars.

In addition, supporting infrastructure—hotels, airport, etc.—cost billions more. But, who built these enormous structures, and at what human cost?

THE HUMAN COST OF QATAR’S CAPITALISM

The vast majority of the work was done by non-Qatari migrants, imported as laborers, construction workers, cooks, security guards, cleaners, etc. The Guardian, more than a year before the games opened, reported the following: “6,500 migrant workers have died in Qatar since the World Cup was awarded.” This only included workers from India, Pakistan, Nepal, Bangladesh and Sri Lanka, and not the deaths of workers from other countries, including large numbers from the Philippines and Kenya.

Qatar’s government listed the vast majority of deaths as being from “natural causes.” But these were primarily young and middle-aged construction workers. Is death from heat stroke under the elevated temperatures in this part of the Middle East a “natural cause”?

While migrant labor working on World Cup facilities garnered the most attention, the fact is that Qatar has a labor force of some two million. This, in a country whose citizens make up only abut 15% of its population. The rest are migrants, the vast majority male laborers. Women make up only 25% of the population, and many of them are also migrant workers.

Qatar, one of the richest countries in the world, runs on sweated migrant labor. In Doha, Qatar’s capital, migrants work at various jobs sometimes for 12 hour shifts—and then are transported to their labor camps en masse.

The migrants, who keep the entire country running, are at work or the labor camps—in essence, a confined existence, “a prison where you can work.”

December 18 – International Migrants Day – Demand an end to interference and wars. Defend peace, respect the rights of refugees and migrants!

Fifa has no balls over Qatar

Qatar at the crossroads?