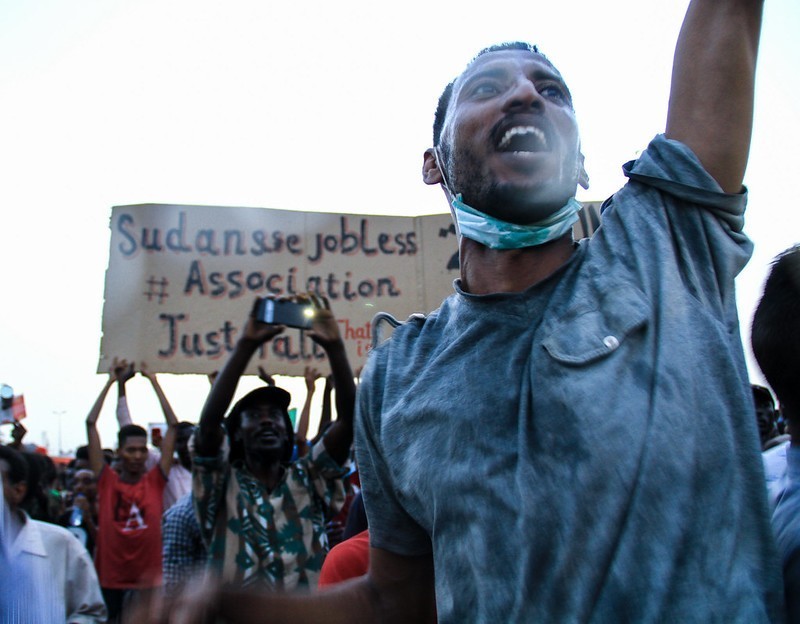 More than four months after the military coup last October destroyed the transition to civil rule, dozens of resistance committees continue to launch demonstrations, marches and protest meetings, issue manifestos, and hold assemblies to debate how to defeat military rule. (See Nov.-Dec. 2021 N&L for the first major statement by The Sudanese Workers Alliance for the Restoration of Trade Unions.)

A scene from the Sudanese Revolution, April 10, 2019. Photo by Hind Mekki.

It is these decentralized resistance committees, emerging from below throughout the country, that have powered the movement. The committees transcend class, age and ethnicity, and have been created in both urban and rural areas. Led by young organizers, they are a sharp contrast to the top-down political organizing that characterized Sudanese politics before the revolution.

KIDNAPPED FROM THE HOSPITALS

More than 20 mass demonstrations have been organized since the coup. Non-violent demonstrators have been met with tear gas and bullets. More than 80 have been killed, with hundreds wounded. The military junta, led by Lt. Gen. Abdel Fattah al-Burhan, have also begun kidnapping demonstrators in their homes and even hospitals and holding them incommunicado in prisons.

Today resistance committees exist by the hundreds; their origins date from 2013, when students and opposition activists began protesting rising gas prices. They reemerged in 2018 with the popular uprising against the longtime authoritarian head of government Omar Hassan Ahmad al-Bashir.

His overthrow came in 2019, in part carried out by his own military, who wish to retain control and usurp the revolutionary movement. The popular movement insisted there must be a full transition to a civilian government with elections. This was to take place in a two-year transition period with a joint military-civilian council.

Meanwhile the neighborhood resistance committees continued, providing self-organization of healthcare, garbage collection, tutoring of students and more. Importantly, they voiced political demands, particularly justice for those killed during the anti-Bashir uprising, challenged the transitional government on its economic agenda and, crucially, organized mass rallies against continued military rule. Against this background the military staged its October coup, ending any transitional phase.

Women are insisting on their full revolutionary participation as they face sexist barriers within the movement. (See “Sudanese women deepen fight,” March-April 2022 N&L)

Sudan’s 2019 revolution overthrowing Bashir’s rule was usurped by a military intimately involved in decades of his rule. The question now is whether this country of 45 million in northeast Africa can achieve a new beginning. The resistance committees are proof that the struggle continues.

Conversations on the Sudan Coup