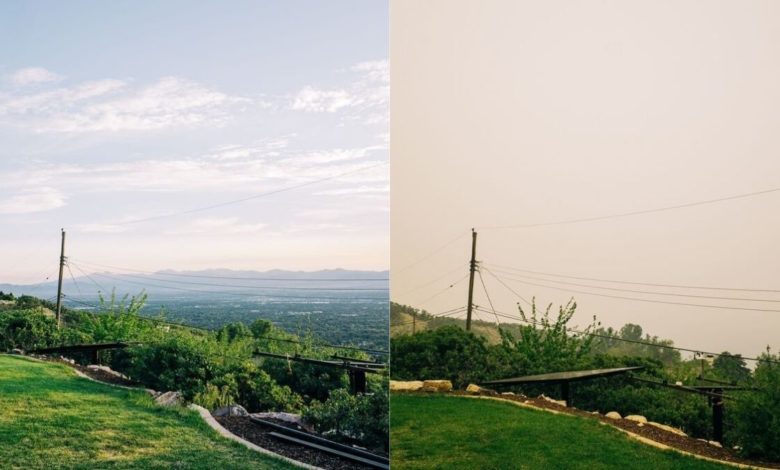 Salt Lake City, Utah has ranked first for worst air quality in the world twice in the past two weeks. While poor air quality is not a new problem for Utah, the climate crisis is exacerbating the problem due to the devastating increase in wildfires, caused in large part by climate change-fueled severe droughts throughout the region, in the warmer months. These wildfires are responsible for Salt Lake City reaching the top of the list for the world’s most polluted air on August 6 and again on August 16.

The quickly escalating air pollution in Utah is a public health crisis that warrants immediate, system-wide intervention. To achieve the changes that are needed to clear the air and prevent the worst impacts of climate change, it is critical that the people unite to demand a new system that will value the health and well-being of both the people and the earth over the profits of the ruling class.

The geography of the Salt Lake Valley makes it particularly susceptible to poor air quality due to a meteorological phenomenon called inversion, which means the valley’s cooler air traps a layer of smoke and pollution under a higher, warmer layer of air. With multiple fires in Utah and California burning out of control due to capitalist mismanagement of the land and climate change, as well as a lack of precipitation, pollutants gather in the atmosphere to dangerous levels.

While the health impacts of breathing in this smoke are particularly dangerous for the elderly, pregnant women and people with other pre-existing health conditions, the levels of air pollution reported in recent days are considered a health risk for everyone. Recent research has noted that in addition to causing sudden asthma attacks, pneumonia, heart attacks, and strokes, the poor air quality also increases the risk for transmission and severity of viral infections — including the COVID-19 Delta Variant.

Utah is among several states listed with severely high infection rates of the COVID-19 Delta Variant, with hospitals recently reporting they are above 100% ICU capacity. With hospitals already over capacity, residents experiencing new or worsening health conditions due to the toxic air cannot afford inaction from the government.

While these toxic, smoke-filled days are becoming more of a public health threat each year, even the typical air pollution levels documented in recent years have been found to reduce the average resident’s lifespan by an average of 2 years according to a study published by BYU in 2020.

According to IQAir, the primary drivers of pollution emission in the Salt Lake area are motor vehicles (55%), home and business emissions (27%), non-road combustion sources like construction equipment, airplanes, boats, and lawn mowers (10%), and industry-related emissions (8%). While Utah’s government has made attempts in recent years to reduce carbon emissions across the state, their attempts will always fall short of what is truly needed to combat the impacts of climate change on the air quality in Utah. A glaring example of this incompetence can be found in Utah Governor Spencer Cox’s response to the emergency drought conditions in the state this year. In June, Cox issued two emergency drought declarations and simply encouraged water conservation among individual Utahns, even though residential water use represents a tiny fraction of the total water use in Utah. In addition, Cox urged Utahns to join him in seeking divine intervention to resolve the crisis by asking all Utahns to “pray for rain.”

These actions demonstrate the futility of relying on the capitalist government to make the real changes needed to adequately address the climate crisis. But the ineptitude of the ruling class is not without reason — they exist to protect the interests of a tiny class of people, with interests opposed to the vast majority of the world population. Working people around the world need a fundamental reconstruction of society to allow for the system-wide changes needed to combat the climate crisis.

To learn more about socialist solutions to climate change and how to get involved in organizing this imperative struggle, we encourage you to check out a free, online course developed by the Party for Socialism and Liberation.

Photo: Before and after photo smoke and pollution rolled in. Photo from the same location in the Salt Lake Valley just days apart. Photo cred: Sergio Gomes