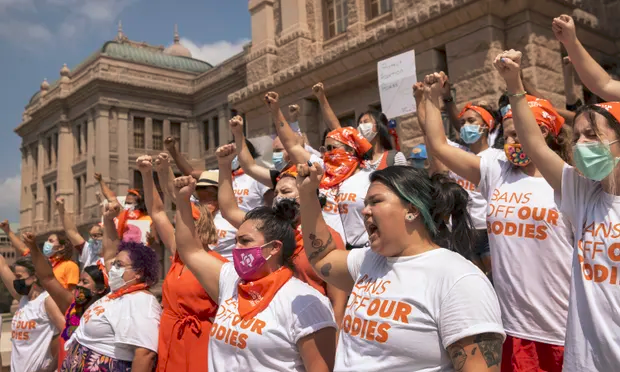 Over 600 marches and rallies are being organized to take place across the country Oct. 2, two days before the U.S. Supreme Court reconvenes for its fall term. The right to legal abortion is at stake. On Dec. 1, the case of Dobbs v. Jackson Women’s Health Organization will be argued. Since the state of Mississippi is challenging the landmark Roe v. Wade SCOTUS ruling in 1973 legalizing abortions, this case could determine its fate.

In every state and Washington, D.C., multinational, multigender and multigenerational demonstrations will call for reproductive rights and health care for all. Everyone is united around the demand for “safe, legal abortions,” a right won by a hard-fought movement that pressured a mainly Republican-appointed SCOTUS to legalize the procedure. Today, the majority of U.S. residents support the Roe decision.

More than 90 organizations, under the umbrella of the Women’s March, issued the call to “Mobilize and Defend our Reproductive Rights” Sept. 2, the day after the unpopular anti-abortion law went into effect in Texas. Senate Bill 8 bans nearly all abortions and encourages vigilantes to collect bounties from anyone who “aids” an individual in obtaining an “illegal” abortion, as defined by Texas politicians, even the most desperate victims of rape, incest and domestic violence.

An appeal to SCOTUS by Texas abortion providers was smashed Sept. 1 by the Court’s conservative majority, who upheld the state’s law, the most restrictive in the country. A copycat bill was introduced into the Florida legislature Sept. 22. Other state governments are poised to imitate this legislation. Eleven states have laws on the books which would prohibit abortions if SCOTUS overturns Roe.

Pro-choice activists warn of an abortion ban across the South. This would give the states more control over individuals’ reproductive health care, trample on human rights and deny personal autonomy and decision-making, especially for the most oppressed people.

On Sept. 24, Texas misogynist and bigot-in-chief Gov. Greg Abbott further restricted access to abortions by limiting prescriptions for medication abortions. He threatened prison time for doctors who disobey his edict, even if they practice out of state. Some 40% of abortions are done using this method.

The Texas rightists’ admitted goals are to intimidate and crush the many “helpers” of desperate pregnant people, to bankrupt and shutter reproductive health clinics and to punish medical professionals who, out of sympathy and adherence to their ethics, perform the procedures.

One doctor is fighting back. Dr. Alan Braid, a San Antonio OB-GYN, announced in a Sept. 18 Washington Post op-ed that he had performed a prohibited abortion to challenge the inhumane, illegal law. This physician, who has performed abortions for 49 years after seeing three teenagers die from botched abortions, is a hero. He rightfully asserts “abortion is an essential part of health care.”

This fundamental right is under fierce attack by reactionary forces in state legislatures, courts and executive positions, backed by wealthy donors and organizations. They are hell-bent on destroying access to abortions needed by millions of people. They seek to isolate and make the lives of the poorest and most oppressed people even more difficult and to exert even more state control over their lives. In Texas, 70% of abortion patients are women of color.

Anti-abortion laws are a declaration of war on low-income pregnant people — Black, Latinx, Indigenous, Asian, migrant, disabled, transgender and victims of sexual violence. Youth are hard-hit by Texas’ or similar legislation elsewhere, as they must get parental or judicial approval to obtain an abortion. This is nearly impossible within the short time limits set by Texas and other states.

Increasingly, those who seek to end unintended pregnancies are women living in poverty. Those with financial means can afford more effective contraception and/or the costs of obtaining out-of-state abortions, while low-income individuals are pushed to the point of desperation.

Abortions happen, whether legal or illegal, safe or unsafe. Where the procedure is prohibited or severely restricted, pregnant people often turn to more dangerous abortion methods. Legalization brought about a big step forward in health care.

Now many pregnant people must travel hundreds of miles out of Texas to obtain safe abortions, experiencing additional stress, taking days off from work, locating transportation, finding childcare and raising funds. Adrienne Mansanares, chief experience officer for Planned Parenthood of the Rocky Mountains said, “They are fearful. You can see terror on people’s faces.” (The Santa Fe New Mexican, Sept. 19)

After Texas’ abortion ban went into effect on Sept. 1, the Biden administration barely reacted. It took a loud outcry to pressure the Department of Justice to file a lawsuit against Texas challenging this “illegal” law. The case will be heard Oct. 1, a month after Senate Bill 8 was implemented. House Democrats symbolically passed the Women’s Health Protection Act Sept. 24, but reactionary senators will most certainly block its passage.

Resistance is growing. Protests have been held in Austin, the Texas capital, and in front of SCOTUS’ building in Washington. Funds to aid pregnant people in Texas are pouring in to pro-choice organizations. Women and gender oppressed athletes are speaking out in a collective voice, while scores of amicus curiae briefs are being submitted to SCOTUS to protest a potential overturn of the Roe decision in the Dobbs case.

Monica Simpson, Executive Director, SisterSong, Women of Color Reproductive Health Collective, states on Facebook: “No one should have to live in a world where their body and reproductive decision-making is controlled by the state. We will continue to work to make sure that is never a reality in Georgia or anywhere else.”

Workers World endorses the Oct. 2 mobilization and is participating in many cities, just as we marched for “free, safe, legal abortions” in the early 1970s and later to oppose the anti-poor Hyde Amendment. WW has consistently demonstrated against and written about restrictions on this basic right, as reactionary state legislatures have enacted obstacles to obtaining the procedure, aimed mainly at low-income, young people and people of color.

WW hails the activists who have been fighting back for years against the racism and misogyny inherent in the “anti-abortion movement” and among their governmental allies and tucked within the restrictive laws. We laud the activists who expose and denounce anti-abortion extremists for their espousal of white supremacy.

WW says the only way forward is to keep pressuring the government to protect reproductive rights. A united front focused on struggle is needed to push back the right wing. That requires building an independent movement — not relying on the Democratic Party — of women’s and pro-choice groups joined with people of all nationalities, the LGBTQ2S+ community, workers, labor unions, im/migrants, disabled people and incarcerated workers. It means joining with organizations fighting racist police terror and those promoting immigrant rights, government services and social justice, and other progressive forces, left and socialist parties.

Such a movement would include the most oppressed people in the leadership. And it would aim at the underlying cause of bigotry, white supremacy, misogyny, homophobia, poverty and exploitation of workers: capitalism.