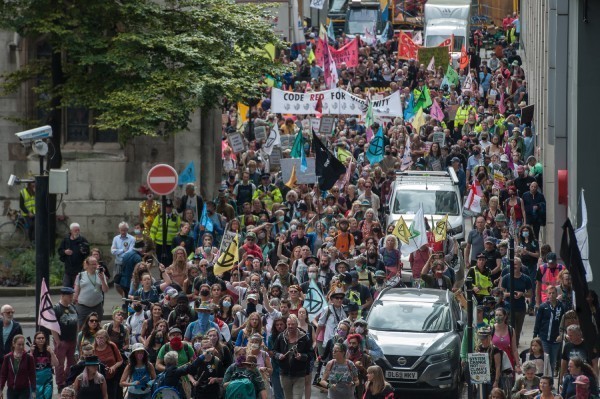 Extinction Rebellion (XR) protested outside parliament on Wednesday as the group continued its second week of action.

It came after activists staged a “die-in” at the Science Museum, tried to occupy two central London bridges and blockaded a dairy factory during the previous two days. They marked the latest actions in XR’s Impossible Rebellion, which began last week.

Outside parliament protesters accused the government of “greenwashing”—hiding inaction on climate change behind green promises.

Protester Anne told Socialist Worker that it’s “bullshit” how the Tories present themselves as climate leaders and then do nothing. “The climate crisis is the biggest emergency that we face, but no one in power is taking it seriously,” she said.

Karen, who has been at the Rebellion since Saturday, said, “Those in power are talking and talking and not doing anything.

“They talk about lowering emissions by 2050—I want to know how? How are they going to do that when they give the go-ahead to build a coal mine in Cumbria and to extract oil in the North Sea?”

Rebels marched from Parliament Square to the Department for Business, Energy and Industrial Strategy, and then on to Trafalgar Square.

Placards and signs read, “Scientists are really scared, why aren’t politicians?” and, “We have to be here for all life on Earth.”

Many of the rebels at the greenwashing demonstration were angry about the police repression against protesters on Tuesday.

Anne said the behaviour of the police during this rebellion has been “shocking”. “I was there to see what went on at London Bridge,” she said. “The police were pulling people down from the XR bus and the van.

“I saw them push a wellbeing officer in a hi-vis jacket, who was just trying to see if a person being arrested was alright.

“I used to trust the police, but after getting involved in XR, I don’t anymore.”

Callum added that he believed the police’s response to XR had been “excessive” in this rebellion.

“Even at really small actions there will be hundreds of police officers,” he said.

Trudi, who also attended the Greenwashing protest, agreed. “I was at a small action organised by XR grandparents and elders, at most 40 of us there,” she said. “But about 20 cops showed up.

“I’ve also seen counter-terrorism police out, I’m really not sure if that’s necessary.”

Trudi was carrying a placard that read, “Police get another job”. For her, the behaviour of the cops shows what their real role is. “The police are constantly saying that they are protecting the public,” she said. “But they aren’t, they are protecting business as usual.

“They protect this system. They are at odds with what we do because I and a lot of people in XR are clear that to really get climate justice we need everything to change.

“We are the ones that are really protecting the public by sounding the alarm.

“I know that sometimes alarms are annoying but ultimately they are designed to wake us up.”

The Impossible Rebellion is set to go on at least until the weekend, with a large march from Trafalgar Square organised for Saturday.

All those who are against repression of XR, want to smash the Tories’ policing bill and demand action on climate change should be on it.