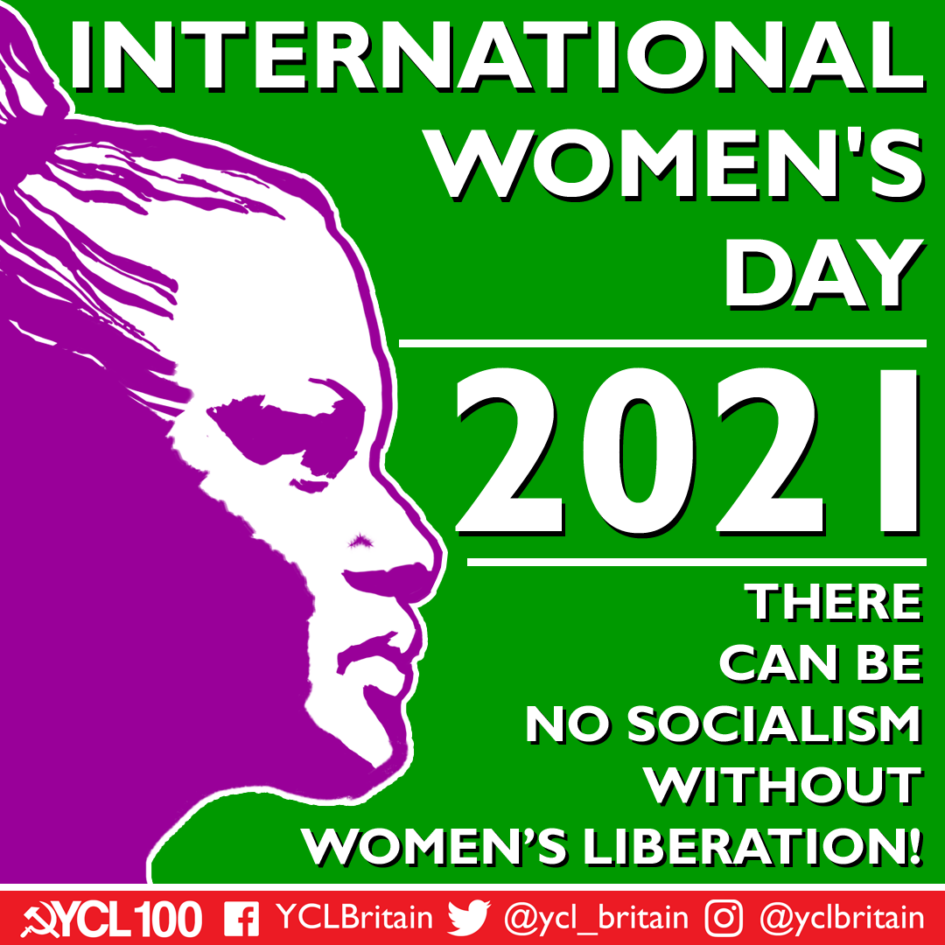 The Young Communist League sends greetings and solidarity to working women everywhere on International Working Women’s Day 2021 and calls for an assault on austerity policies that leave vulnerable women in the lurch.

The Young Communist League sends greetings and solidarity to working women everywhere on International Working Women’s Day 2021 and calls for an assault on austerity policies that leave vulnerable women in the lurch.

Britain’s mainstream media and ruling class are keen to present International Women’s Day as a celebration of how far we have come; upholding “girl boss” capitalism, presenting women’s representation in the upper echelons of the status quo as fundamental progress. The YCL and the Communist Party completely reject this.

Working class women face systemic exploitation, oppression and injustice in the workplace, the home and society as a whole.

The rate at which the gender pay gap is shrinking has stalled since the 2008 Financial Crisis and in some sectors it has even grown. Women are more likely to work in part time, precarious and low paid work, often reflective of societal gender roles. Even in the workplace, women are seen as caregivers, shoulders to cry on or silent paper pushers.

The vast majority of spending cuts in the last decade have fallen on women in one way or another. Women are more reliant on public services and are more likely to be employed in public sector organisations, both under attack from continuing austerity policies that seek to strengthen the hand of monopoly capital. This places women on the frontline of class struggle in Britain and paints a picture of the power that women could have.

Throughout the pandemic, women have faced the brunt of the rising level of necessary reproductive labour (or “housework”) required to keep the working class alive and working. Working class women go to work and make profit for a boss then keep their families and partners alive at home. This defines the economic oppression of working women under capitalism and class society generally. Unlike wealthy women, a working-class woman is unlikely to have the financial resources to hire a nanny or servant to take on the reproductive burden. When a woman becomes a mother, on average she sees her wages fall by 11% compared to her childless colleagues, whereas a man’s wage rises 21%.

All of this corresponds with the ideology of Britain’s ruling class, maintained by state power, and reflected by societal attitudes, behaviours, people of influence and institutions. It reflects the necessity of women’s labour in the home and the workplace in the very functioning of class society. This culture preserves and reinforces the economic exploitation of women. This exploitation is a key pillar of capitalism globally and in Britain.

How does the ideology of the ruling class present itself with relation to women?
Firstly, women are often presented as less able and less intelligent than men. This is used to force women into low skilled and low paid work and as a justification to pay women less generally.

Secondly, a “woman’s place” is in the home or raising children. The purpose of this myth is to keep women in the home, while engaging in low paid and part time work, raising a family and by proxy; the next generation of workers, sustaining the basis of capitalism. Thirdly, women are sexual objects to be evaluated, first and foremost, on how appealing they are to men, according to standards dictated by the mass media. Finally, women’s bodies are commodified directly through the sex industry, above and below ground. With the increasing normalisation of pornography and the ease of access this provides to explicit images of the degradation of women, the ruling class maintains an assault on the male perception of women workers. If a male worker sees a woman as a commodity to be consumed and discarded, he is unlikely to see her as an equal in common struggle against the ruling class.

All of this adds up to keeping women in a subservient role and forms billion-pound industries in retail, advertising and sex.

The objectification and sexualisation of women is also a key factor in the sexual violence and abuse that are endemic in British society. Mass media and advertising presents women as a means for the gratification of men. While the #MeToo movement shed some light on the extent of the problem, it is merely the tip of the iceberg. Over half of women and two in three young women (18-24) have experienced sexual harassment at work. The number of recorded rape offences has been increasing year on year since 2009. The number of rape convictions remains pitifully small when compared to the amount of reported cases, smaller still when those that go unreported are taken into consideration. Millions of women continue to be the victims of male violence.

Our fight carries on

The struggle for women’s liberation is far from over in 2021 and the Young Communist League calls for a redoubling of efforts in the labour movement to prioritise women’s issues generally, as class issues rather than an exception to them. Women are uniquely positioned to play a leading role in a revolutionary movement towards ending capitalism and building socialism. Particularly in Britain, where women make up the majority of the organised working class.

We are experiencing a ‘counter offensive’ amid a culture war between neo-traditionalists, liberal feminism, and campus-based cancel culture that seeks to individualise and blur the lines of gains women have fought for and won. Women’s struggle is reduced to one of many competing identity conflicts, rather than a key arena of class conflict.    Reactionary forces, fed by developments online and in the USA, have been at the forefront of this attack. Most worryingly, it is amongst young people, disillusioned with capitalism but without a class understanding of society, that these trends are most prevalent.

It is plain to see that the fight for women’s liberation and equality is still not being advanced effectively in Britain in 2021. Many of the gains of previous decades are today under threat.

Britain’s Communists argue for a feminist politics as an integral part of class struggle and the fight for socialism. Even under capitalism gains can be made, better rights and a more dignified life can be won for women in Britain. In the pursuit of these rights and reforms, a women’s movement can gain revolutionary momentum and play a decisive role in ending capitalism. This can only be achieved where the struggle for women is linked with the fighting organisations of the working class, in our unions, our communities and our homes.

A fundamental and conscious shift in the attitudes and behaviours of working class men will be necessary, and a revolutionary organisation capable of delivering that, more so.

Only under a socialist society, free from the exploitation of human beings, which is committed to smashing oppression based on sex and race, can women’s liberation be won.

The history of the 20th Century has proven that revolutionary advances in the role women play in society are not only possible, but essential, to the development of socialism.

The old myths of the ‘inferior sex’ have been smashed by the leading role played by women in the construction of socialism and by the frontline duties they have performed in the struggle against fascism.

Across the world female revolutionaries have led the struggle for socialism.

Today the countries of the socialist camp such as Cuba, China and Vietnam have made stunning gains in advancing the rights of women and defending the world against the advancing Coronavirus.

Women are guaranteed full equality and are entitled and enabled to play a full role in the country’s political, cultural and social life.

Under socialist society there is no economic imperative to subjugate women – indeed socialism relies on unleashing the creative potential of all, regardless of race or sex. Therefore, the position of women in socialist society is fundamentally and continuously improving, while women in capitalist society are left behind – with capitalism always finding ways to co-opt and commodify women’s struggle.

The Young Communist League calls on women across Britain to join the revolutionary fight for socialism in our lifetime. Women’s oppression can be defeated by smashing the class society it stems from. Women, workers and working women have done it before and we will do it again.

In the ashes of the old capitalist society, women can play a leading role in building an advanced economy, built on need over greed.

The past we inherit, the future we build!