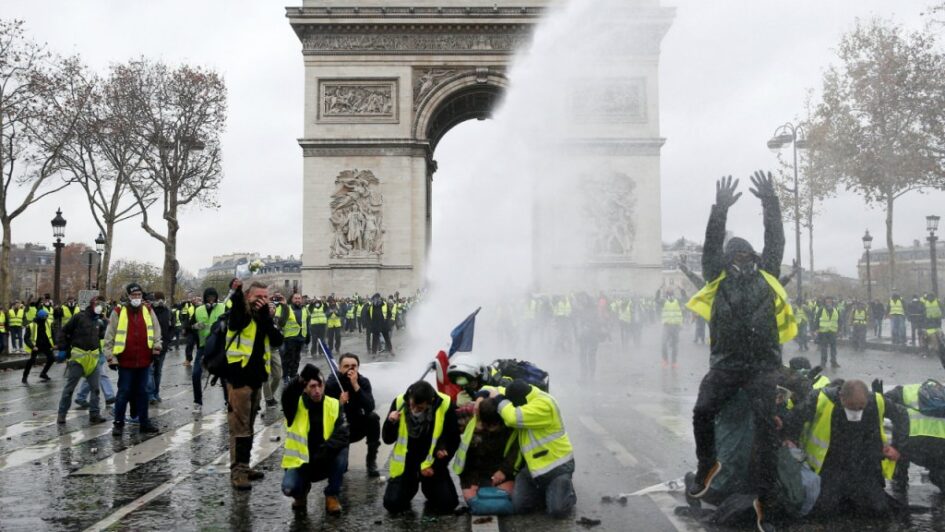 The Yellow Vest protests, which have rocked France from the Île to the coasts since November, have experienced a second wind after a series of small concessions by the Macron government were deemed insufficient. The initial impetus for the demonstrations were of course the Macron government’s significant fuel tax and inspection fee increases, but beyond the old so-called “purchasing power” demands of the movement, themselves questionable, other demands have arisen, notably heterogeneous, and not least of which those pertaining to asylum seekers and migrants.

We have reproduced these demands here because english-language sources, especially those with a “left” bent, have systematically deleted them, while retaining most other points, in a effort to obfuscate the nature of the protesters and their demands, alluding only to “migration reform” and other such anodyne phraseology.

Indeed, copy-cat protests have arisen in belgium, the netherlands and kanada, all with easily identifiable reactionary elements, and in the case of kanada, anti-migrant sentiment is dominant.

Clearly, given their inclusion in a list of demands supposedly addressing cost of living grievances, no one can possibly mistake the fact that migration is, for the labor aristocracy, an economic issue. It is a tax on them, spiritually if not financially, to live with the enemy, the oppressed proletarians of Asia and Africa. Unless, of course, you are the first world left, who have come out in uncritical support for the right wing demands of the protesters and dismissed all available evidence that it is in fact the FN, and other ultra-reactionaries, who are the most vocal movers and opinion-makers among the “yellow vests”.

LOOP comrades have expertly unmasked the tailing of the right wing by so-called leftists who have ignored the nature of this upsurge, as well as the ultra-reactionary kernel of the current “second wave” of protests:

In the last days, the Yellow Vests have made further clear their rejection of internationalism, taking to the streets to declare their opposition to President Emmanuel Macron’s arrival in Marrakesh, Morocco, to sign the UN Global Compact for Safe, Orderly and Regular Migration. Numerous outlets for the Yellow Vests have argued this “Pacte de Marrakech” is a “death certificate for France,” an attempt to facilitate “the arrival of 480 million migrants to destroy Europe,” “900,000 additional immigrants per year just for France,” and is intended to “prepare the subversion of France” in a “great replacement” of the “French” (that is, Europeans) by immigrants. And, against the intentional obfuscations of the revisionist and opportunist “left” of the imperialist countries, some Yellow Vests even put their opposition in stark class terms…

Indeed, the Marrakesh pact on immigration, whose signatories will be meeting tomorrow to discuss a single migration process for the imperialist world, has become the major impetus for new violence. Country after country, from the u$ to israel, austria to australia, have pulled out or rejected the pact utterly.

Further, we are told constantly, the protests are supported by the vast majority of French citizens. We believe that. The majorities of the imperialist nations are toxic and chauvinist, and, increasingly, violent of their own accord, not trusting their own governments to enact violence on their behalf. Such is the growing chasm between the big bourgeois and the labor aristocracy, and such is the mass base of fascism.

All this is quite self-evident, and we have no interest in attempting to convince the social-imperialist and, indeed, social-fascist left fractions who press on with whitewashing the increasingly militant labor aristocracy. Whether the labor aristocrats strike out against both the bourgeoisie and the world proletariat, or join with the former against the latter, the yellow socialists who comprise the great mass of the western left will coddle them and enable them.

Although it is key to building an understanding of the political situation, analysis alone is insufficient. All mass unrest in the imperialist countries (where the “middle classes” are dominant) contains a similar kernel. Again and again we are made to confront the labor aristocracy and their yellow socialists in situations of unrest. In these moments we must have a set of directives, a plan to face the strategic realities of class struggle in the First World.

Therefore the strategic tasks in times like these, as we see them, are as follows:

While we have no illusions about the strength of genuine anti-imperialists in the core countries, we do not, and cannot, discount them. Our task is to grow the anti-imperialist and internationalist movement, and to emerge from moments of mass unrest larger and more unified than before. Therefore, to identify and unite the advanced anti-imperialist, internationalist, and anti-capitalist fractions and individuals is urgent and necessary; to locate those leftists already conducting anti-imperialist work, those leftists whose work with refugees and other oppressed groups makes their involvement with the current wave of mass reaction increasingly precarious; to expose in our propaganda the crimes and nature of the imperialist state, the reactionaries, and the limits and betrayal of the squalid parochial demands of the “apolitical” labor aristocracy and the first worldist left, and in their place raise the demand for internationalism, anti-imperialism, and socialism.