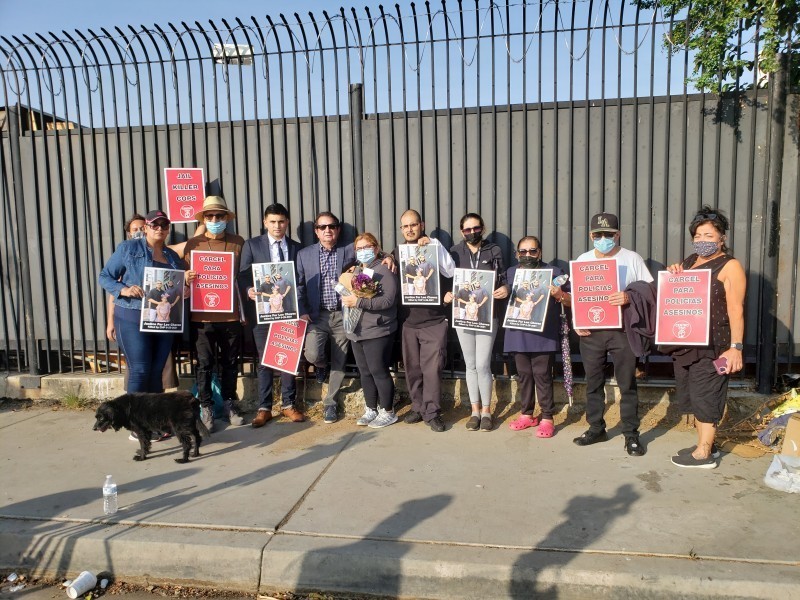 Los Angeles, CA – On September 28, after a traffic collision, 24-year-old Leo Chavez was shot and killed by the California Highway Patrol (CHP). His mother Maritza Padilla is devastated and wants justice for her son. Chavez’ surviving family lives in Boyle Heights near the Ramona Gardens neighborhood. Ramona Gardens is no stranger to police killings by the LAPD and Los Angeles County Sheriff’s Department.

The family, Justice X attorneys Humberto Guizar and Christian Contreras, and Centro CSO held a press conference on September 29, at the scene of the killing to denounce another murder of a young Chicano by police.

Leo Chavez worked as a security guard, attended school and liked to work out at a nearby fitness center. His mother Maritza Padilla said Leo was a loving young man and is calling for justice and the prosecution of the CHP officers. His brother Jesus Chavez said, “He did not deserve to die like this. We want justice!”

The Ramona Gardens area community of Boyle Heights has suffered discrimination, segregation, pollution and police abuse for many years. But this community has a history of fighting back. Arturo Smokey Jimenez, 19, was killed by East LA Sheriff Jason Mann on August 3, 1991. That night the community rebelled, with over 300 people protesting, throwing rocks and bottles at police. 75 deputies were called in to suppress the community and people were ordered at gunpoint to stay indoors. Jason Mann was linked to the white racist deputy gang the Vikings when he worked at the Lynwood Sheriff’s station.

California Attorney General Rob Bonta will investigate this killing, according to the Sacramento Bee. The California Department of Justice (DOJ) Police Shooting Investigation Team for Southern California arrived at the scene. The California DOJ has a Special Prosecution Section for independent investigation and prosecution of officer involved killings. In the past, former LA District Attorney Jackie Lacey refused to prosecute any of the over 600 police killings during her eight years in office.

The family and lawyers – along with Centro CSO, a local group based in Boyle Heights and East LA – will be planning future protests and continue to organize to demand an end to police killings of Blacks and Chicanos and fight for civilian community control over police.

Carlos Montes is a Centro CSO member and organizer