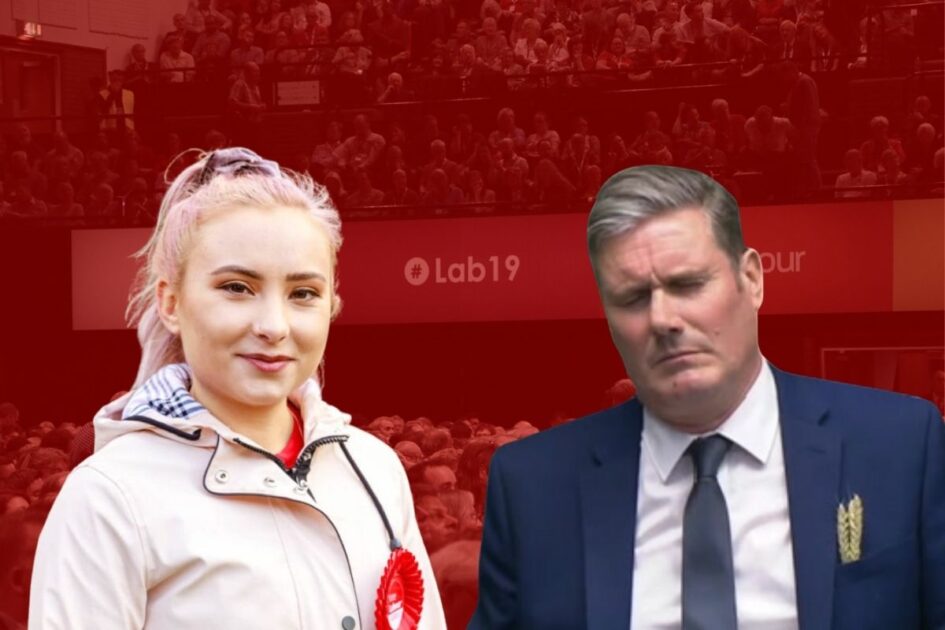 On Tuesday this week, chair of Young Labour Jess Barnard took to Twitter to reveal yet another scandalous example of the Labour right’s contempt for democracy. In an explosive thread, Barnard revealed that right-wing general secretary David Evans had refused Young Labour (YL) permission to hold a national conference.

This is despite the fact that, according to the Labour Party rulebook, holding a national conference is the democratic right of Young Labour, the party’s official youth section. And given that Labour’s annual conference is also going ahead in a few weeks time, any excuses referring to the pandemic do not hold water either.

Barnard also revealed that, despite the best efforts of herself and Lara McNeil, the Labour NEC youth rep, their appeals for this basic democratic right – to hold a conference – were stonewalled by Evans.

Similar to the right wing’s bureaucratic shutdown of CLP meetings and AGMs, this is yet another less-than-shining example of Starmer and Evans steamrolling over the rights of members and party democracy.

This is a disappointing and difficult thread to post, so buckle up!

A few months ago, myself and @lara_eleanor met with David Evans once we were told the party would not be holding a young labour conference this year, despite it being a rulebook requirement.

In the end, however, Evans did concede to allowing a special Young Labour day at the upcoming party conference in Brighton. Labour’s general secretary also stated that extra resources would be allocated to the YL national committee (NC) to help support this.

In good faith, the YL NC proceeded to submit their proposal about what this would entail, within the deadline provided by Evans. But despite Barnard contacting them every single day since this, there was then no further communication between the general secretary and the Young Labour NC. The party bureaucracy was essentially ignoring them.

Party officials did make sure to get in touch about one thing, however. The YL NC were contacted to be advised that “anyone from Palestine Solidarity Campaign will be refused as a speaker, as will Jeremy Corbyn”.

This reveals entirely the priorities of these Blairites and bureaucrats. Behaving like dictators, they block and censor the left at every opportunity: denying the party’s youth wing the right to hold a conference; providing no help to organise the event offered as a compromise; and censoring Britain’s biggest Palestine solidarity organisation, as well as Labour’s former leader.

With three weeks to go until the annual conference, this has obviously left the YL national committee in a tight spot. Barnard has said that her and the committee are having to work around the clock to get the events organised in time for the conference. This is no doubt a deliberate move by the right wing to try and set up the left-dominated Young Labour leadership for failure.

It is also likely a cynical ploy to turn away even more young members – who are already abandoning the party in droves – from being active in the party.

Given that young people overwhelmingly backed Jeremy Corbyn and his left-wing programme, and that the youth are more likely to be drawn to socialist ideas, Starmer and the right wing are clearly trying to actively alienate – rather than engage – this layer of the party, in order to shore up their position.

Barnard’s thread also revealed that the YL NC has not received any communication “from Keir Starmer or the leaders office since being elected almost a year ago”. “No acknowledgement we exist, no reply to emails, nothing,” the Young Labour chair asserted.

The reason for this is no doubt because those elected to the Young Labour national committee are left-wing, Momentum-backed members. This cold shoulder approach to the democratically elected leadership of the party’s youth wing is another part of Starmer and the Labour right’s war against the left.

Jess Barnard put it bluntly, saying to Novara Media: “[The rulebook] doesn’t say young members can only organise in the party if they agree with Keir Starmer.” But it is clear from all their outrageous actions and behaviour that the Labour right are not playing by any rulebook.

Like a shark smelling blood in the water, a right-wing ‘journalist’ for Murdoch’s The Times, Oliver Kamm, decided to weigh in on this debacle.

Kamm has outrageously stated that Young Labour supports “a second Holocaust against the Jewish people”, due to their solidarity with the Palestinian struggle. He also describes Young Labour as “being parasitic upon the party”, and has allegedly even taken to contacting the workplaces of those who show support with Barnard and Young Labour!

Kamm is a notorious supporter of ex-prime minister and war criminal at large Tony Blair. Such creepy behaviour reveals the kind of company that the Labour right likes to keep.

Although Barnard has indicated that the party is looking into this disgraceful smear, support for the Young Labour NC from the party’s leadership has unsurprisingly been non-existent.

You might expect better from a late-middle aged, well-paid “journalist”, but from a Murdoch hack whose articles include ‘The “Islamophobia” Scam’, it’s not so surprising.

Under the regime of Starmer and the right wing, we can only expect a continued cold-shouldering of young members, at best, and outright smears on Young Labour’s leadership by the capitalist media, at worst.

Rather than appealing to these Tory infiltrators, Young Labour must mobilise young members behind them and go on the offensive.

With an increasingly radical generation looking for a lead, Young Labour should respond to the right wing’s attacks by becoming a clear rallying point for young people eager to get organised and fight for socialism.

In this respect, it is welcome to see that socialists on the YL leadership have come out fighting, launching an open letter with demands for: the reinstatement of Young Labour’s autonomy over events; the provision of a conference next year, in line with party rules; and resources and staff – which Young Labour is entitled to – to be put at the disposal of its NC.

We promised to deliver an autonomous democratic @YoungLabourUK equipped to organise in every community.

In response the leadership undermine us while british journalists libel us. Enough is enough

Join the fight back, sign our petition and lets organise https://t.co/pOfpxkceES

On top of these demands, Young Labour’s leadership should go further, and defy the party bureaucracy’s attempts to deny them a national conference. This means pressing ahead and organising a YL conference with the democratic involvement of grassroots young members and activists at the earliest possible date.

As we said during the Young Labour elections:

“Grassroots activists in Young Labour and throughout the labour movement must organise to build a genuinely socialist opposition to the Labour right wing and the Tories at all levels. This means confronting the capitalist class and mobilising workers and youth around a clear socialist programme.”

This CLP also notes the disgraceful smears against Young Labour by Murdoch journalist Oliver Kamm, who has accused Young Labour of supporting a second Holocaust, due to their support for the Palestinian people.

Given that the Young Labour national committee is dominated by socialist young members, this CLP believes that this cold shoulder approach to Young Labour is part of the campaign waged by Keir Starmer and David Evans against the party’s left wing.

This CLP declares its solidarity with the Young Labour national committee, and demands that the leadership ends its hostile relationship with the official youth wing of the party.

Young Labour should be supported in organising a national conference to democratically discuss the crisis in the party – and how to fight the Tories by mobilising workers and youth around a clear socialist programme.