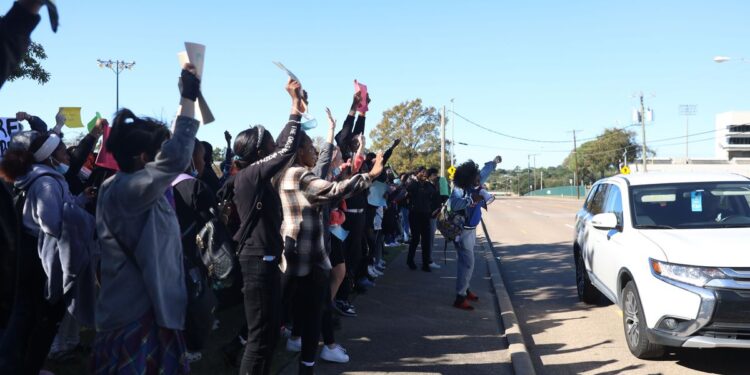 From the November-December 2021 issue of News & Letters

Undocumented youth volunteers made the difference between Arizona’s Sen. Kyrsten Sinema winning or losing her electoral race in November 2018. Since then, she became one of the Democrats to cash in big with corporate donors by blocking removal of the Senate filibuster in whole or part. That leaves no conceivable way that Congress can enact a legislative path to citizenship for undocumented people anytime soon.

Since constituents are unable to set a meeting with Sinema and are disallowed from even entering her Senate offices, young immigration activists have to confront her at her many political fundraisers, in airports, on flights, in the classrooms of Arizona State University where she is a visiting professor, or inside bathrooms there.

Flight passenger and DACA recipient Karina Ruiz told her: “Senator, hello, how are you? I don’t want to disturb you, but at the same time, I want to see if I can get a commitment from you, Senator. This is my life and the life of millions on the line.”

ASU student Blanca said: “I was brought here to the U.S. when I was three years old. In 2010, both of my grandparents got deported. I’m here because I definitely believe that we need a pathway to citizenship. My grandfather passed away two weeks ago and I was not able to go to Mexico to visit him because there is no pathway to citizenship. We need to hold you accountable for what you promised us that you were going to pass when we knocked on doors for you.”

You can do more than be sorry for my loss, you can deliver us citizenship. I don’t recognize you @SenatorSinema you organized marches against SB1070, and now that we need you remain silent & ignored me, unacceptable. pic.twitter.com/wyYGVw0WG3

On Oct. 27, high school students in Richardson, Texas held a protest against the inconsistent enforcement of the dress code between white students and students of color. In nearby Lake Highlands, Texas, students signaled they experienced the same discrimination by protesting on a windy Oct. 29. High school sophomore Dylan Barber told Dallas Morning News, “I hope they see how much kids care about this, that they are leaving school and standing in the cold.” Barber also recorded a teacher who used a racial slur several times in front of students. That teacher has been put on administrative leave.

More than 10,000 youth marched in Santiago, Chile, on Oct. 18, the two-year anniversary of a major uprising of over one million people led by students which led to the election of a commission to rewrite the Chilean constitution. The rewrite is currently being drafted. Among the protesters’ demands were universal healthcare, free and improved schooling and higher pensions.