Yuri Gagarin in his own words 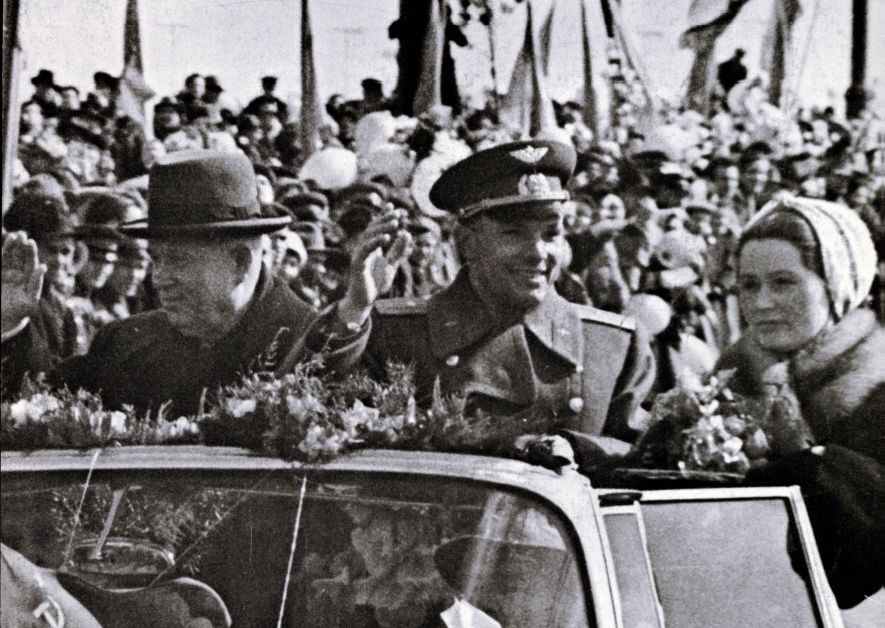 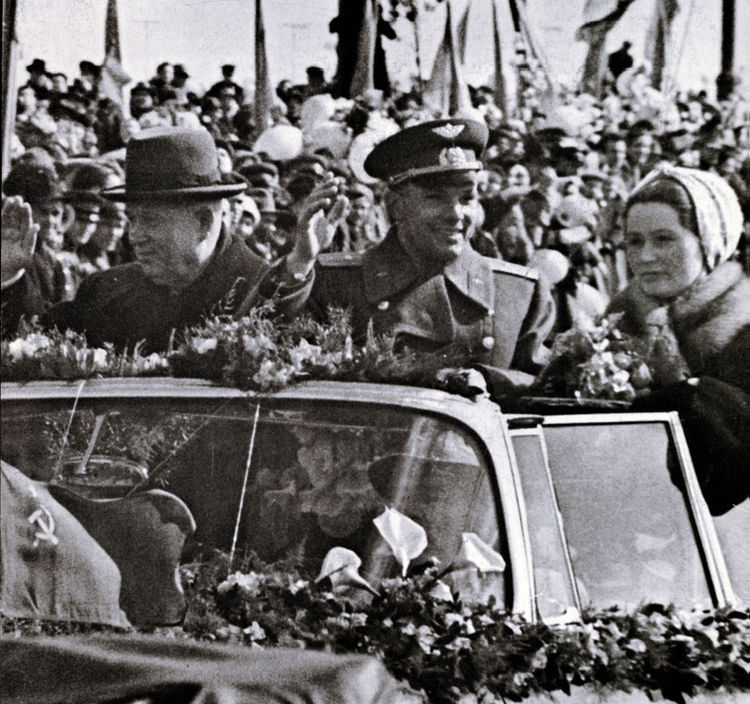 Yuri Gagarin, his wife Valentina Ivanovna and Nikita Khrushchev during a parade after his triumphant flight.

In honour of the birth Yuri Gagarin (March 9, 1934), the first person in space, we here republish an article he wrote for the Soviet press after his historic flight on April 12, 1961.

MY PARENTS were poor peasants before the Revolution, and the older generation, my grandfather and grandmother, were also poor peasants. Therefore I express my regret concerning my relatives mentioned (that he came from a princely family) but I have to disappoint them.

After graduating from the technical school in 1955, I graduated at the same time from the Saratov Aeroclub. I was then enrolled in the Orenburg Flying School, from which I was graduated in 1957 as a fighter pilot. I then entered the Armed Forces of the Soviet Union.

Later, at my earnest request, I was included among the candidates from whom cosmonauts of the Soviet Union were to be selected. I finished my training and, as you see, I have become a cosmonaut.

I received the necessary training worked out by our scientists.

I finished my training successfully, mastered the machinery and instruments well, and was ready for the cosmic flight.

I felt excellent before the flight and was confident of its successful outcome.

During the boost stage of the flight, that is. when the spaceship was going into orbit, the accelerating forces, the vibration, the noise and the other factors of this pan of the flight did not distress me, and I was able to work fruitfully, in accordance with the program of the flight.

In my opinion weightlessness does not affect the functioning of the organism, the

performance of physiological functions. During the whole flight I went on doing the fruitful work required of me under the flight program. During the orbital flight I took food and drank water, I maintained constant radio contact with the earth along several channels both on telephonic and telegraphic signals. I made observations of the conditions of my environment, of the functioning of the equipment of the spaceship. I made reports back to earth, made entries of these observations in my log book and recorded them on a tape recorder.

My feelings during the entire period of weightlessness were excellent and my capacity for work was fully maintained.

Then, according to the program of the flight, at a predetermined time, the signal was given for the descent. The ship was oriented in the appropriate way, the braking engine apparatus was switched on and the speed reduced to what was necessary for the descent to earth. The descent took place as anticipated in the flight program, and, back on earth. I was very pleased to meet our own Soviet people. The landing took place in the prearranged area.

I would like to say a few words about my observations while in space. The earth, from this height, 175 to 300 kilometers (110 to 185 miles), looks very good. The appearance of the earth’s surface is roughly the same as we see in flights to great heights in jet aircraft. It is very good.

Large mountain areas, large rivers and forests, the coastline, islands were easily distinguishable. During the space flight I was fully able to adhere to what we pilots call navigation by geographical locality. The clouds covering the surface of the earth could be seen very well, the shadows of these clouds on the earth. The sky, however, was quite black. The stars in the sky look brighter and can be seen more accurately against this black sky.

The earth has a very characteristic and very beautiful blue halo. The aureole becomes distinct at the horizon when a gradual transition in color takes place. The sky gradually becomes blue, violet and finally black. The transition is very smooth and very beautiful. When emerging from the shadow (of the earth) the sun fell on and penetrated the atmosphere, and here this halo took on a slightly different color.

On the surface itself, on the very horizon of the surface, one could see a bright orange color which then merged into all the colors of the rainbow, giving the sky light blue, deep blue, violet and black colors. The entry into the earth’s shadow occurs very quickly. Darkness comes at once and nothing is visible. At this time on the surface I saw nothing was visible since, obviously, I was passing over the ocean.

The emergence from the earth’s shadow also occurs very quickly and abruptly. I endured the effects of the factors of space flight very well since I had been trained for it.

At present I feel very fit. I am very grateful to our Soviet designers, engineers and technicians, to all the Soviet working people who created this wonderful ship Vostok.

I am boundlessly happy that my beloved motherland has been the first in the history of humanity to break through to outer space. The first airplane, the first satellite, the first space-ship and the first flight by man to space — such are the stages on the great road of my homeland in the conquest of the mysteries of nature.

To this aim our people are being confidently led by the Leninist Communist Party.

At every step of my training, life and work in the trade school, in the industrial technical school, in the aeroclub, in the aviation institute, I have constantly felt the solicitude and attention of the beloved Party of which I am today a member.

I should like to mention especially the loving human care which is being shown in our country toward ordinary people by the Central Committee of the Party, the Soviet government and our dear Nikita Khrushchev.

Literally a few minutes after landing on earth I received a very warm telegram from Nikita Sergeyevich congratulating me on the successful accomplishment of my space flight.

We have dedicated this flight to the heroic Soviet people, to our government, to our dear Communist Party and to the twenty-second Congress of our Communist Party. Personally, I would like to do a lot of flying in space. I like it.

I would like to go to Venus, to Mars and to do some real flying.

Banned words and racism in schools

The F Words, by Barbara Gregorich

Montreal: ‘Workers need to build our own political party’