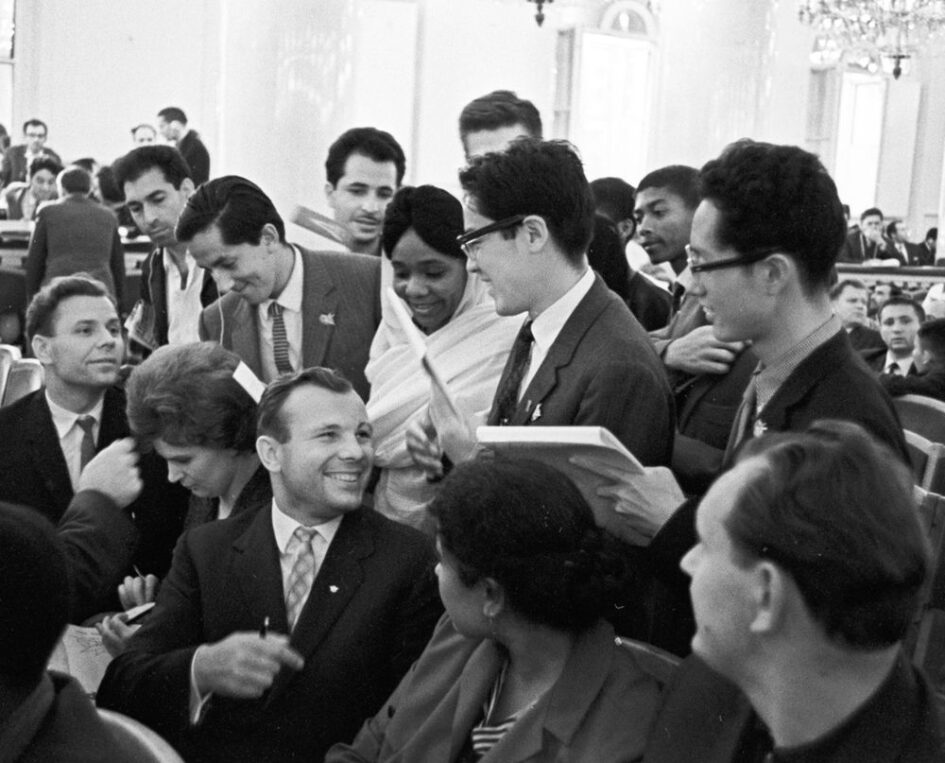 Gagarin and Valentina Tereshkova (the first woman in space) sign autographs and chat with young people at a youth forum, 1964

As we all know, Yuri Gagarin was the first person to ever go into space. After his historic flight in 1961, Gagarin was regarded as a hero both in the Soviet Union and around the world.

He was an international superstar.

Gagarin became a goodwill ambassador of sorts not just for Soviet science and the Soviet space program, but for the USSR itself. He was immensely popular. His sudden death during a routine flight in 1968 at age 34 devastated the people of the USSR and was met with sorrow and shock globally.

Gagarin took the time to try to respond to the many letters he received, especially those from young people. In 1967 he received a letter from a Canadian teenager named Irving Lasar in which Lasar asked Gagarin questions about whether or not one had to lie and be “cut-throat” to get ahead, as well as the role luck plays in success.

In the wake of Gagarin’s death the Soviet press published his response in which he rejects the idea that one needs to be selfish to succeed and extols the virtues of comradeship, teamwork and honesty. It gives insight into his thinking as a person and a communist.

Irving wrote: What advice would you give a person at life’s crossroads who was preparing to make a major personal decision? I would very much appreciate your answers to these questions, the answers of a man who is living in the new world.

My first question: Should one lie, in spite of one’s principles, or tell the truth if compelling interests call for a lie (assuming that is the situation)?

Secondly, there seem to be more capable people than openings where they can demonstrate their abilities. Hence, one possible conclusion is that to be successful a person must “cut other people’s throats”. Do you think that is so, and if it is, is it right?

And, lastly, do you think a person can attain the goal he sets himself if he works hard, or must he have luck, too?

Excuse me for taking up so much of your time, but I would also like to know what you consider to be success.

Gagarin replied: I gave your letter much thought. I’m pleased to see you ask your-self such serious questions. It seems to me that your future will greatly depend on how you answer them yourself.

You, perhaps, know that in my country we address each other as Comrade, and from early childhood I’ve been surrounded by comrades and friends. At the age of eight I became a member of the Young Pioneers; in this organization we went in for sports, took our first hikes, slept in tents in the woods and learned to start a camp-fire with a single match. And one of the principal things I learned in those years, which I have held onto all my life, was the importance of comradeship.

In time I joined the Soviet Young Communist League, and later the Communist Party. The principle of comradeship is primary in these organizations, too.

I wrote this introduction, Irving, so that you would better understand my replies.

You ask if one should lie for the sake of one’s personal interests. No, Irving. I think one should always be honest and say what he really thinks. You will then respect yourself and earn the respect of others.

I think that only a truthful person can be brave and strong, can be a real man. He who lies cannot be a true friend. He can never be trusted. If I’m ever destined to go into outer space in a rocket with another person, then my comrade will be one who never lied for the sake of personal gain.

My answer to your second question is also No. It’s not true that there are fewer places where a person can show his ability than there are capable people. At least in my country it’s not so. In my country a person is valued for his initiative and the effort he puts into his work. The main thing in any kind of work, in my opinion, is the creative spirit, the ability to introduce something new, something of your own.

I believe in luck, Irving, just as I believe in sensible risk. Luck will attend him who works hard to achieve his goal.

But I would like to stress two things. The goal you set yourself should be worth achieving, and you should have comrades around you. They will come to your aid if you lose heart and want to give up. They will also share with you the joy of victory, for no success will make you happy if you’re alone.

Going for Gold: Neocolonialism and Canadian mining in Africa

Letter from the Field